Michael Kiefer; We Will Not Forget 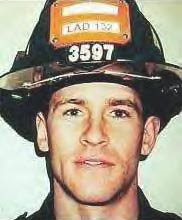 New York, Pennsylvania, the Pentagon, Benghazi. We will not forget.

On 11 September, 2001, I was in Amman, Jordan. I was the senior member of a small American military detachment getting a refresher course in Arabic at the Royal Jordanian Military Language Institute. At the time of the attacks, I was just signing onto my email account at an internet cafe in central Amman. I saw a news banner announcing that two planes had crashed into the towers of the World Trade Center, and I was certain that I was looking at an advertisement for a movie. Within two minutes, my embassy cell phone rang. "Get all your people to the embassy right away," I was told. That's when I knew it was no movie ad.

As I was scrambling to get my colleagues together, 26 year-old Michael Kiefer was breathing his last in New York City. Michael was one of the 2,996 innocents who lost their lives in Al Qaeda's most successful attack on our nation. Maybe you remember it? In case you've forgotten, let me remind you by telling you about Michael, because Michael Kiefer is a shining example of what our nation lost in that attack.

To say Michael was a fireman does not do justice to the drive and the passion he brought to his work. Some people have a job they do and others have a job they are; by all accounts, Michael was one of the latter. From his early years he knew that he wanted to be a fireman. Childhood photos show him wearing a fireman costume, and people tell of how, as a boy, he was so accomplished at mimicking the sound of a siren that he once convinced his school bus driver to pull aside for a firetruck that wasn't there.

Michael bought a scanner that he used to listen for fire alarms, and would ride his bicycle to watch the firemen work. Sometimes he rode so far from his neighborhood that he was brought back home by police escort. Michael earned perfect scores on his fire academy physical and written entrance exams, and began training in October, 2000. He graduated in December of the same year. He drew one of the busiest assignments, Engine Company 280/ladder Company 132 Firehouse of Crown Heights, Brooklyn. In achieving his lifelong dream, we could say that Michael accomplished more in his short life than will many men who live to see a century, but that would be only half his story.

In addition to being a fireman, Michael was a committed Christian, beloved son to Pat and Bud, and older brother to Kerri and Lauren. He was saving money to buy a ring for his girlfriend, Jamie Huggler. Son, brother, boyfriend. He was the kind of guy who dedicated himself to a job that would put his life at risk in order to save others. He was just one of 2,996 who died at the World Trade Center that day, but in him was a reflection of all the strength, the selflessness, the goodness, that we love about America.

On this anniversary of our nation's loss, take a moment to remember Michael. Say a prayer for the peace of mind of those he left behind, and give thanks that our nation can still be the home of men like him.


Posted by Steven Givler at 1:34 PM No comments: 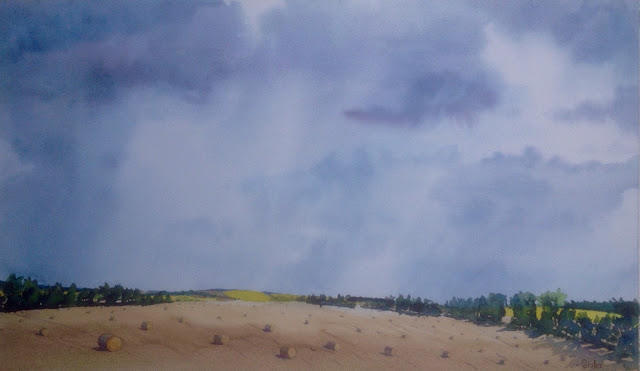 It seems I just finished this painting of hay rolls, but we're already past the season of hay cutting, and just about into the apple harvest.
Posted by Steven Givler at 12:58 PM No comments: 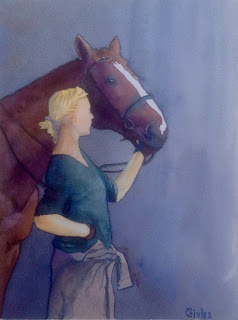 Here's a painting I did recently of my favorite horse, and one of the girls who works at the stable.
Posted by Steven Givler at 12:53 PM No comments: