Breaking News From the World of Global-Political Gangsta Rap 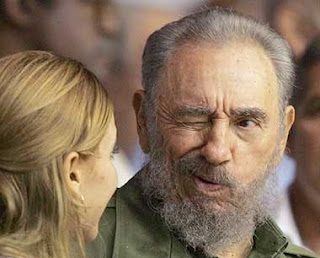 The trio, having re-formed after a brief hiatus caused by creative differences, was still riding high following the astounding success of their latest album, “International Community,” which featured the unforgettable chart-toppers “Liberty This!”,  “Ain’t No Such Thing as Private Property,”  and “Young White Girlz (and Small Brown Boyz).” Like all good things this too, it seems, must come to an end, and fans were dismayed to hear that Kronic Mo-Go have canceled all their upcoming events due to the return of Go-Vez’s cancer.
The announcement is some vindication, but small comfort, for vendors who were blasted by fans on internet chatrooms for publishing Go-Vez retrospective discs entitled “Buy this now, ‘cause I don’t believe in the afterlife,” collectible commemorative plates, and signed, limited edition prints of a fan letter from UN Secretary General Ban Ki-Moon, who is himself a bit of a dabbler in the métier.

And while many would suggest that good taste forbids it at this early date, Yours truly has received indications from reliable industry sources that the remaining two-thirds of Kronic Mo-Go are already considering a short list of prospective replacements for Go-Vez.  Despite rumors to the contrary, I can positively confirm that South Korean artist PSY is not on that list, owing to the fact that he has not (at least so far) taken over and ruined an otherwise perfectly good country. And although I can’t disclose every name on the list I can tell you that Kronic and Mo-Jad are taking a close look at vocalist-performance artist Bashar (BAD) Assad, shown here with his posse during his, "Bad Chemicals" tour: 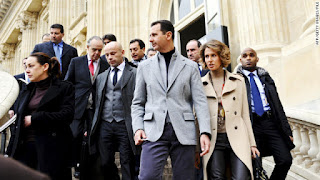 But even if BAD Assad is their first choice, experts consider it unlikely that Mo-Jad and Kronic will be able to lure him away from what looks like the busiest performance schedule of his life.

Some industry insiders pointed to his first lady, Asma, a performer in her own right, but spokesmen for Mo-jad, who thrills crowds when he sings the falsetto counter-chorus “Small brown boyz,” to Chronic’s “Young white girlz,” said that he flatly refuses to share a stage with a woman who is not completely covered in accordance with Shariah Law.

Also on the list, according to my sources, is reclusive heartthrob and Sexiest Man alive for 2012, Kim Jong Un, whose recently released disc, "Nukes are Better Than Food," has left critics and fans alike gasping in amazement. 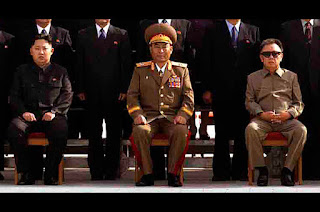 Here he appears seated on the left, as he placed third last year on the wildly popular television show, “North Korea’s Got Talent.” (He was later awarded first place and a life-long recording contract when the first and second place contestants were tragically killed in near-simultaneous hunting accidents.)


Sources could not, or would not, confirm the presence of the name Vladimir Putin on that list.  Putin, considered by many to be the "Vanilla Ice" of this millennium, would add presence to a stage that knows no shortage of that commodity, but many question whether his stolid, methodical, almost metronomic delivery can find a home beside the unbridled savagery of Kronic, or the spastic crunkings of Mo-Jad, the Persian Dervish. 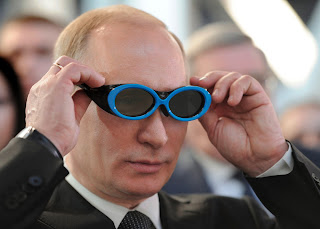 Putin - not enough home-boy from the Homeland?

In addition to whatever creative differences they would have to iron out, it remains to be seen what would become of the globally recognized brand-name of Kronic Mo-Go if one of its members is replaced.  It's hard to imagine a personality as large as would be required on stage being willing to leave the name unchanged to reflect its own addition, but it's hard to predict how would fans react to a name change like "Kronic Mo-Pu."

Yes, Fidel I.T.'s retirement, the death of Kim Jong (Chillin' Il), and the breakup of Kronic Mo-Go give fans of Global -Political Gangsta Rap plenty to feel sad about, and it's undeniable that change is upon us whether we like it or not.  Even so, with acts like these waiting in the wings, we can feel confident that, regardless of the name, the work of Kronic Mo-Go will continue.  The music will go on forever.

Just up the coast is the village of Monte Estoril, where Bica and I like to take our Saturday morning walks.  In the village are lots of beautiful old houses, many of which are decorated with the colorful ceramic tiles that are so characteristic of Portugal.  When I saw the morning light reflecting off these, I knew I'd have to paint them.
Posted by Steven Givler at 1:47 PM No comments:

So Jabba the Hutt was an Austrian Turk? 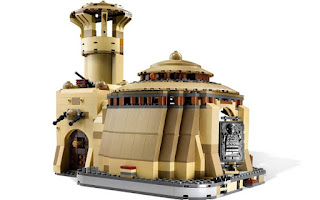 Now I've seen everything.  Apparently, the "Turkish community" in Austria is incensed by Lego's latest offering, a model of the palace of Star Wars villain, Jabba the Hutt.  Jabba, you may recall, was the morbidly obese creature with the John Waters mustache who had a thing for Princess Leia in a belly dancer costume.  (I know you know what I'm talking about.)

The Austrian Turks feel that the Lego palace, seen above, is an INSULT TO ISLAM (These words must be written in full caps, in order to convey the magnitude of the offense.) because - wait for it - it looks so much like the Hagia Sophia Mosque. 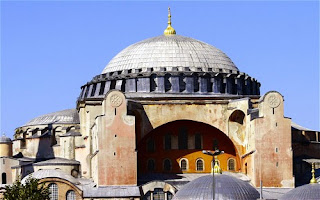 This dastardly act of intentional similarity (Oh the humanity!) is clearly an act of "racial prejudice and vulgar insinuations," in response to which the maligned Austrian Turkish Community is considering a lawsuit against Lego for "inciting racial hatred and insulting human dignity."

Well! Thank goodness someone has finally found the nerve to say it.  I'm sure we were all thinking it, right?

Now, some will point out that Jabba the Hutt isn't human, as if that has anything to do with it.  Well that doesn't mean his character doesn't display the most repellent of human characteristics, does it?  And if Austrian Turks feel that those characteristics somehow apply to them, they have a right to get excited, don't they?

And so what if the Hagia Sophia is an example of Byzantine, not Islamic Architecture, having been a church before it was conquered by the world's most peaceful religion?  Austrian Byzantinians have no right to be offended because this is so obviously a slight against the Austrian Turks, since their cousins, the Turkish Turks are the present owners.  The Hutt Palace has a roundish top with arches and pointy bits.  It is adorned with doors and windows and has a roof and, presumably a floor - all of which are painfully obvious reverences to the Hagia Sophia.  Without a doubt, it is the duty of all wise and sensible people to be offended.

And really, what difference does it make to the charge of "racism" if Islam is not a race, and if the Austrian Turkish community lumps" "Asians" and "Orientals" together as if they were the same peoples?  It is clear that the non-Austrian-Turk, non-Asian, non-Oriental makers of Lego are using Jabba and his crib as a stalking horse for their cruel racist games.

Just as the makers of Coke "as well as all other soft drinks" conspire to ruin good Muslims by tricking them into drinking "very small quantities of alcohol," and just as the Coca Cola logo is clearly an INSULT TO ISLAM, and just as "Pepsi" has been discovered by the shrewd and discerning Hazem Abu Ismail to stand for "Pay Every Penny Saving Israel," this inhuman plot has been uncovered and will not succeed.

In other words, get to Toys R Us and buy yourself a couple of these things, because they're going to be collectors' items.
Posted by Steven Givler at 2:39 PM 6 comments:

Done.  I'd like to show you how they look in their frame, but it's tough photographing framed paintings.  Either you get a shadow from the mat and the frame, or you get glare from the glass, or you get a combination of those factors.
Posted by Steven Givler at 12:07 PM 1 comment:

I Agree: Reinstate the Draft

Retired Army General Stanley McChrystal said recently, that he thinks that reinstating the draft in some form might be a good idea.  This puts him about two years behind former Congressman Barney Frank, and while nobody who knows me would ever expect to hear me say it, I agree with both of them.


Clearly, certain elements of our society are missing from the roles of those who serve, while other elements are too-well represented. This is an egregious error, and will cause untold problems in the not-too-distant future.

To rectify the situation, I propose that we instate not only a draft, but a selective one at that. Effective immediately, I would press into service members of those under-represented classes, and force out many of those currently serving.

If put into action, my plan would remove liars, cheats, thieves, and whoremongers from Congress and replace them with Midwestern farmers, New Jersey mechanics, Texas ranchers, and various small businessmen from all the other states.

I know it will cause a strain on the under-represented honest classes, and I know they will resist. A certain number might even flee to Canada to avoid serving their terms. In the long run though, I believe the country will see that this is in everyone’s best interest.

Please write your elected representatives and tell them to institute the draft.
Posted by Steven Givler at 2:10 PM 2 comments: 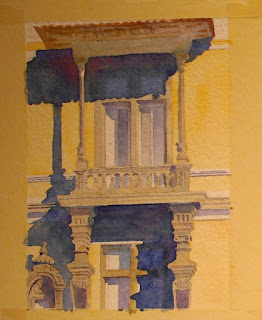 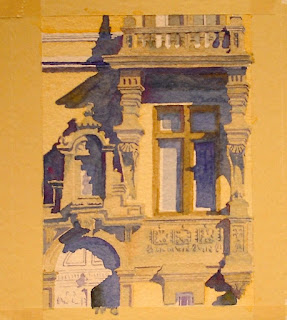 Here's an update on the triptych I'm working on.  There's a strong temptation to rely too much on line and outline.  It comes with painting architectural features, I think, where straight lines are so prominent.  I'm trying hard to resist that tendency, and to instead define things by their shadows, or by the things in front of and behind them.  I think this yields a much more three-dimensional effect.
Posted by Steven Givler at 12:58 PM 2 comments: 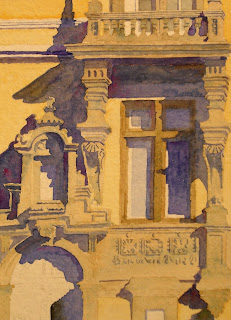 Here's a detail of a painting that I'm currently working on.  It's part of a triptych - three paintings of different views of the same old building in Cascais.  So far, I'm very pleased with how they're working out.
Posted by Steven Givler at 11:08 PM No comments: 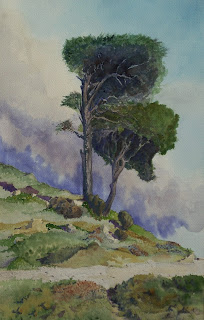 Here's a painting I've had on the worktable for a long, long time.  I knew for months that it wasn't finished, but wasn't sure what was missing.  Over the last couple of days I added contrast and defined things better by their shadows.  Now I can say it's done.
Posted by Steven Givler at 8:27 AM 2 comments:

Here's the final version of this painting.

Hopefully I can be forgiven for returning to a subject I've painted before.  The Aqueduct over the Alcantara Valley never ceases to capture my imagination.  Every time I drive past it on my way to or from Lisbon, I see it in a different light and get new ideas for painting it.  This painting isn't finished yet, but I think it's close enough that you can see where it's headed.
Posted by Steven Givler at 7:17 AM 3 comments: