I could spend the rest of my life painting Lisbon and the surrounding countryside, and never run out of subjects.

This view of Lisbon has been on my mind for a long time.  I've been wanting to show the dome of the Pantheon (Yes, we have one too.) rising above some of the old tiled buildings that line the street as it follows the Tagus to the sea.  It's been on my worktable almost as long as it was on my mind, but not until today, while I am laid up with the flu, have I had the opportunity to put the final touches on it.
Posted by Steven Givler at 10:11 AM No comments: 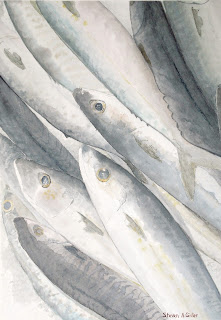 In June of last year, I finished this painting of sardines.  It's one of two or three paintings, though, that never made it to the framer though, because I just wasn't sure about them.  As is the case with my previous post, I've gone back to work on this one.  In this case, it wasn't the composition that bothered me, but the color, or should I say, lack of it.  Here's the final version: 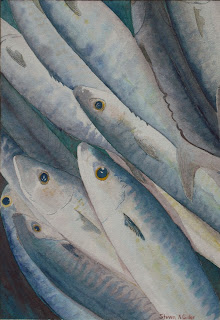 Posted by Steven Givler at 8:40 AM No comments:

I finished this painting back in March.  Well, I thought I had, but then again, I never felt inclined to take it to my framer, so maybe on some level I realized it wasn't done.

I dug it out a week or so ago, and realized the composition just wasn't what I wanted it to be.  The bottom right corner, even with its shadows, was too bare in comparison to all the busy branches everywhere else. The painting suffered from a lack of balance.

I had a four-day weekend last week, but spent it in bed with the flu, which gave me plenty of time to think about how to fix that imbalance, even if I didn't feel up to doing anything about it.  Now, on election night (It's night here in Lisbon, but we're five hours ahead of East Coast, US time, so there's no real news available yet, nor will there be any time soon.) The kids have homework and I was in need of something to keep me busy, so I seized the moment.  Here's the result:
I didn't change anything in the color of the sky, although if you compare the two photographs closely, it looks as if I did.  That's a photography issue that I'll address later.  I think the additional tree trunks in the foreground balance the composition better though, and now I think I can safely have it framed.

I generally don't think it's a good idea to rework older paintings, but there have been just a couple that have called me back, and I'm pleased with the difference.
Posted by Steven Givler at 1:39 PM No comments:

See instructions here.
Posted by Steven Givler at 5:29 AM 1 comment: