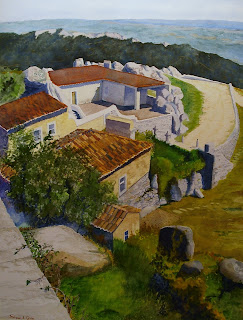 Peninha Monastery sits atop the ridge that runs from Sintra, down to the sea.  From its highest point, depicted by this painting, you can see the 25 April bridge spanning the river Tagus in Lisbon.  If you turn around and look toward the Atlantic, you will see Cabo da Roca, the lighthouse that marks the westernmost point of continental Europe.  You can see one of my paintings of that here.

I'd been working on this painting for a couple weeks, but interrupted it to take on the painting of Venice, which you see below.  It's often hard to start back up on a painting once you've set it aside.  That was somewhat the case with his one, but it also happened that I got some ideas about changes I wanted to make while the painting was hidden away, and I think that made for a stronger finished product.

Now that this is finished, I can get to work on an image that has been waking me up at night demanding to be painted.  It will be similar to this: 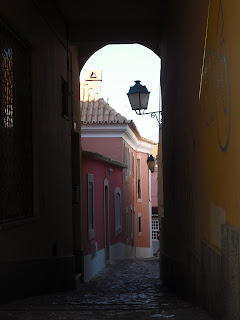