An Article in yesterday's Bloomberg.com  is dramatically entitled


Obama Says Any Chemical Weapon Use In Syria ‘Red Line’ For U.S.

The authors, Margaret Talev and Zahra Hankir, imply that some hard lines are being drawn in Washington, and lead readers to expect that an ultimatum has been delivered.  Almost immediately though, the article departs from the message of the headline and begins to soften those hard lines.

President Barack Obama said any discovery that Syria’s chemicals or biological weapons are being moved or used may shift his position of not ordering U.S. military engagement in that nation’s upheaval “at this point.”

But even this appears to be a misrepresentation of the President's words.  "Any discovery," of, "any"  movement, or "any" use is definitive, but the word "may" implies that things aren't nearly so cut and dried. "At this point," indicates that at another point - tomorrow, or after lunch, or next week - things may be entirely different.

By the time we get to the President's actual words, we see that things are even less clearly defined than the headline would have us believe.


A red line for us is we start seeing a whole bunch of chemical weapons moving around or being utilized,” the president told reporters yesterday in a news conference at the White House. “That would change my calculus."

The "red line" is not "any" use or movement.  The truth of the matter is that it will take "a whole bunch of use or movement." How much, exactly, is that? The amount is intentionally undefined, as is the reaction of the U.S. in the event that whatever limit constitutes "a whole bunch" is exceeded.  We go from the authors' interpretation of the President's statement, which is that," any use/movement" may shift U.S. policy of not engaging militarily to, the President's actual words, which announce that a "whole bunch" of use/movement will "change" my "calculus."  There's quite a difference there.

Doesn't anybody edit this stuff?
Posted by Steven Givler at 11:46 PM 1 comment: 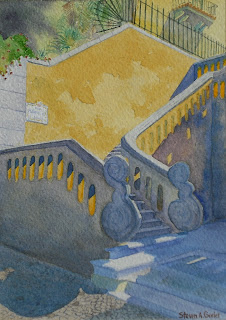 Rua Manoel Vieira de Araujo Viana ends in a staircase.  The steps lead from the old neighborhood above Cascais Harbor down to Fisherman's Beach.  More than just a walkway, the stairs and the walls around them form a box that reflects light and casts shadows, all of which demands to be painted.
Posted by Steven Givler at 12:49 AM No comments:

Update: Feds Have 4 Bullets per Every American

Let's review, shall we?

This is not a comprehensive list, but let's total it up anyway:

The population of the United States is 313,847,465, according to this site, which means that, counting only the ammo listed above, and completely ignoring ammo belonging to the Department of Defense, various federal agencies of the most anti-Second Amendment administration ever, have roughly 4 bullets per every single American.

I wonder how much they'd be buying if we weren't running a budget deficit?

Maybe the National Weather Service is just tired of jokes about weather forecasters.  Maybe they're sick of people who don't believe in Global Warming.  Or Global Cooling.  Or Climate Change.  Maybe they're onto  an exciting new cloud seeding program, that uses .40 caliber bullets to end droughts.  Either way, I think it's kind of odd that the Weather Service - Read that again, the Weather Service is ordering 46,000 .40 caliber hollowpoint bullets and 1500 paper targets.  Does the NWS even carry weapons?

An interesting point of trivia for those not experienced in the shooting sports: Hollow point bullets, which expand on impact with flesh, in order to do as much destruction as possible, are not normally used for target practice, because they're more expensive.  They're used for killing people, and normal, cheap, ball ammo is used for killing paper targets.  Another interesting point about hollow points - they're so effective that the US military isn't allowed to use them.  Hmm.

One has to wonder (not the least since one is paying the taxes that will buy these bullets) just what the heck are our friendly public servants at the National Weather Service up to?  Are they expecting years of drought or catastrophic storms that will tear apart the law and order fabric of our society, or is another government agency using them to make straw purchases to supplement their own?

I ask this because the Justice Department once made a few straw purchases of weapons in a little-known operation called Fast and Furious, so they're kind of experienced at that sort of thing.  I ask, also, because the Department of Homeland Security has also ordered about 46,000 rounds of ammo.  That's noteworthy enough, but if that order were doubled, as in adding their 46,000 to the National Weather Service's 46,000 (strange that they both ordered the same number, isn't it?) that might raise some eyebrows, might it not?

Maybe it's time to invest in a bullet-proof umbrella.

A Tale of Two Paintings

Well, one painting, actually.  I set this painting aside over a year ago, and although I thought it was finished, I never framed it for some reason. 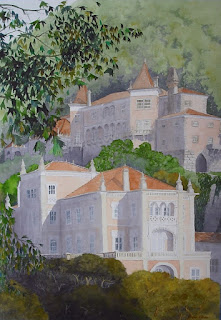 I had a look at it this weekend and realized right away why I hadn't framed it yet.  I still needed some work.  It was lacking in contrast, and the shadows needed some color.  Here's how it looks after a weekend of labor. 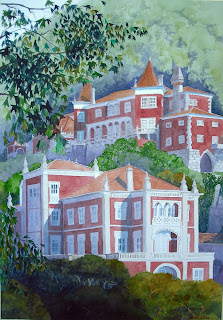 This is a 3.5 x 3.5 inch painting I just finished.  For some reason, peeling plaster and chipped paint always attract me as painting topics.  Portugal gives me a lot to work with.
Posted by Steven Givler at 5:56 AM 2 comments: 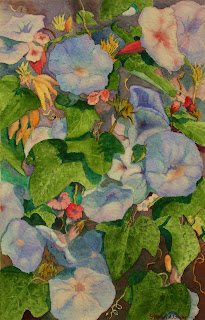 My client isn't expecting this painting until September, so I have some time to set it aside for a while.  After a week or two I'll look at it again, and see if I still think it's finished.
Posted by Steven Givler at 11:57 AM No comments: 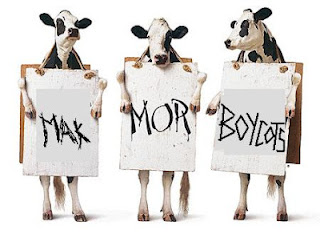 Over at American Power Blog Donald Douglas catalogs the unanticipated effects of the ill-fated Chic-fil-A boycott.  Even on the left coast, restaurants were swamped with customers demonstrating their support, so much so that some of them ran out of food.

Now, how can I get Rahm Emanuel and friends to boycott my paintings?
Posted by Steven Givler at 5:03 AM No comments: