I've been in Bavaria for the last 5 weeks, and Norway for the two weeks prior to that.  I'm way behind on blogging, so to compensate, I'll refund the subscription dues of both my readers, and I'll try to post a bunch of photos, too.

This is a shot of a pair of storks, nesting on a bell tower in a village church in Spain.  I was pushing hard to get to Bavaria on time, so I didn't take a single photograph on my way there.  On the way back though, I tried to make up for it.

Over the course of those weeks, northern Spain turned from a beautiful green - except the fields of poppies, which were an impossible red - to shades of gold and brown.  I was surprised by the difference, but I suppose that's only because, up in the Alps, everything was still so green.

I did some painting in Bavaria, and even sold a few, but I struggled with the change of palette.  Portugal, even in the winter, and even with the sea, has far fewer greens and blues than Bavaria in the Spring. 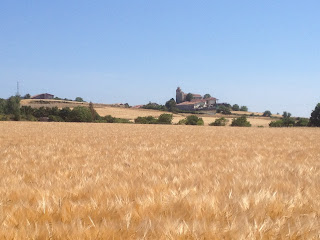 Here's a shot of some of those beautiful golden fields.  Up in Basque country it was still very green, but it was harder to get off the highway and explore there, so I don't have any pictures of that area.  I'd love to go back and paint there though.  It's beautiful.

Here's the route I drove.