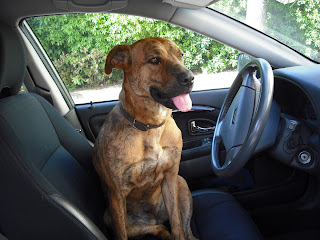 Bica has officially been my dog for a week now.  I asked her owner if he would sell her to me and he refused.  "You can have her though," he said, "since she really prefers to live with you anyway."

I had to put new insurance forms in the cars today.  Bica loves to ride in the car, so when I opened the door she hopped right in.  She's still there, as a matter of fact, curled up on the floor in front of the driver's seat, having a snooze.  She didn't want to get out when I was finished and I didn't see any reason to force the issue.  I left a door open so she wouldn't get too hot, and I left my studio door open so that when she wakes she can join me.  She's a good studio dog.  She takes her tennis ball to her rug and lies down while I paint.
Posted by Steven Givler at 8:34 AM

Dog is your co-pilot!?

That's true; she has a bark like the hound of the Baskervilles.