Tonight's Painting (and Yesterday's, and the Previous Day's) 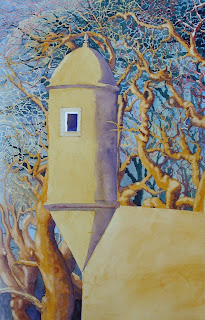 Here's an update on the painting I'm working on currently.  Like I said, it's going to take a while, but it's starting to take shape, now that I'm getting around to shadows and highlights.  Someone told me the other day that watercolor doesn't allow you enough depth of color; I'm determined to disprove that with this painting.
Posted by Steven Givler at 11:02 AM No comments:

This Could Take A While. 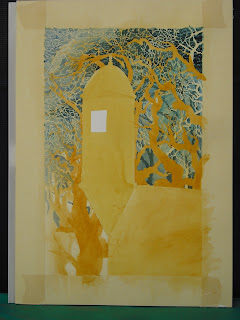 Portugal's coastline is dotted with old forts.  Some have been preserved as museums, some are restaurants and hotels, and some are falling into ruin.  There's one very near my house that seems to belong in the latter category, although it's hard to tell for sure, since it's surrounded by a high wall, within which trees and dense brush crowd together.  It's tough to get a view of the thing, but what one can see - mostly these corner watch posts - is very dramatic, especially in late afternoon, when the light is golden.

Much closer to my house, just a couple houses over, in fact, is a beautiful little home that was recently reclaimed from dilapidation.  I like to walk past and see what a dramatic change the owners have made.  They resurfaced the crumbling walls and painted them white, and they reset the paving stones that run along the margin of the street.  Above their gate towers an old cedar tree.  They trimmed it back so it no longer blocks their driveway, and now in late afternoon, the sunlight finds its way into the interior of the tree, and highlights the intricate network of branches that used to reside in perpetual shadow.  I walked past that tree earlier this week, and as I thought for the thousandth time about painting those lacework branches, it occurred to me that they would look particularly good forming a backdrop for the watchtower of a fort.

I thought, too, that I'd like to work in colors that not only put across the golden light and the deep shadows, but that also refer to that school of painting practiced by people like Percy Gray, who painted in California in the first half of the 1900s.

Other references keep rattling around in my mind as I'm working.  For some reason, I keep thinking of Gustav Klimt and old Japanese woodcut prints.

I wouldn't say that what I'm doing looks anything like either of those, or, sadly, like anything that Mr. Gray would have painted, but I'm aware of all of them, and I think each, at least in some small way, influences me.
Posted by Steven Givler at 1:39 AM 1 comment:

A Dog and a Coffee 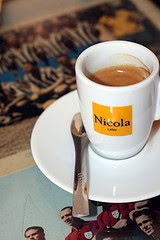 Sometime after the great earthquake of 1755, coffee and coffee houses established themselves in Lisbon.  Some say this was the work of the Marques de Pombal, who planned and helped rebuild the city, while others say it had more to do with coffee being an important export of so many Portuguese colonies.

Whichever is the case, as coffee, which is typically served as an espresso, began to gain in popularity, it was accompanied around Lisbon by advertisements recommending that it be drank with sugar.  The ads looked something like this:


Beber
Isso
Com
Acucar
This is why, around Lisbon, a typical Portuguese coffee is referred to as a Bica. 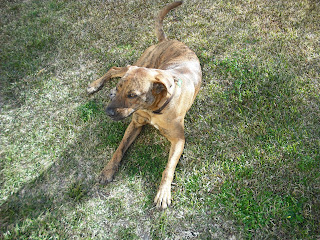 This seems like a fitting name for the dog who leaped the garden wall and made herself at home here.  Her coloring is very coffee-like, and her disposition is very sweet. 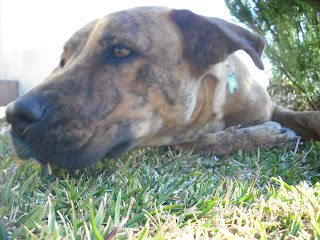 She's energetic and affectionate, but she's also calm and gentle, especially after she's chased the ball or gone for a walk. 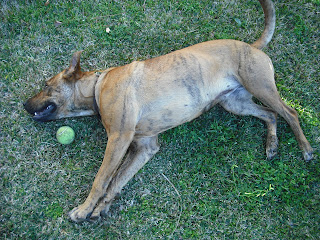 She seems to like nothing better than just being around people.  Any time I walk out my gate, odds are that she'll be waiting there, hoping to be taken for a walk, or brought inside for a bite to eat.  If I am on my way walking somewhere, she'll accompany me.  When this happens, nearly everyone we meet will say, "Oh, is this your dog?  She's been in my yard."  Nobody seems to mind, but everyone expresses concern that she's going to be hit by a car.  This has happened at least once already, according to her owner, but he still doesn't keep her at home.
If I can convince her not to eat the family cats, I'll ask the owner to let me have her.
Posted by Steven Givler at 3:41 AM 1 comment: 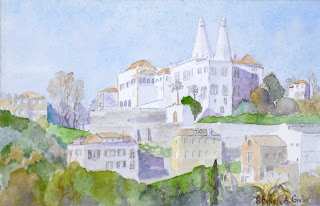 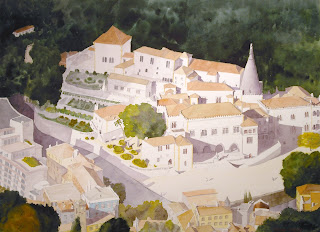 but from other angles (This is looking down at the palace, from the ruins of the Moorish Castle.) and other sizes.  (This is a much larger painting, at 15 x 21 inches.)
Posted by Steven Givler at 8:58 AM 2 comments: 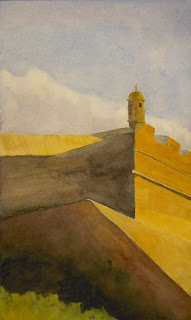 Here's another painting of the fort just down the hill from where I work.  Under normal light, you'd probably think of Fort St. Julian as a drab grey, but when the late afternoon sun hits the western walls, there's nothing drab about it.
Posted by Steven Givler at 3:52 PM No comments:

The 38th "Tour of the Algarve" Starts Today.

The Tour starts today.  No, not the Tour De France, it's the Tour of the Algarve - one of the early season shake-down events used by a lot of the pro teams to prepare for the big tour.  For the next 5 days, cyclists will do battle over the toughest climbs in the area, and, if the recent weather around Lisbon is any indication, will ride against some nasty headwinds, too.  (If I'd stopped pedalling at any point during my ride to work today, I think the wind would have blown me all the way home.  Unfortunately, a headwind in the morning does not mean a tailwind on the ride home in the afternoon; around midday the winds shift, so I'll probably face the same thing going home.)

I'll be working, but if I could, I'd go and watch.  A bike race is the perfect vehicle for seeing some of Portugal's most beautiful scenery, and ever since I first experienced it more than 30 years ago, I still find a bike race to be one of the most enjoyable ways to spend an afternoon.  There is nothing like the color, the movement, and the sound of the tires rushing by.

I wonder if anyone would notice if I didn't show up for work tomorrow...
Posted by Steven Givler at 6:06 AM No comments:

Work's been rough for the last 4 or 5 weeks, so there hasn't been much time for painting.  Even so, I've managed to get my hands on the brushes for a few minutes here and there, and this is the result.  This house is in a village not far from here, but it's on a very busy road, and has no view of the sea.  I guess that's the fun of being a painter; you can paint things as you think they ought to be, instead of being forced to just photograph them as they are.
Posted by Steven Givler at 2:40 PM 2 comments: