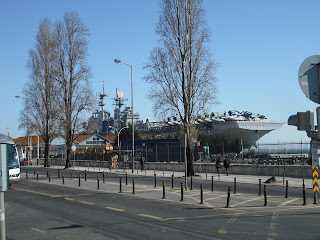 The USS Bataan, an amphibious assault ship, is visiting Lisbon these days.  On Friday, she steamed past our base on her way up the mouth of the Tagus river, and work pretty much came to a standstill until she disappeared from sight.  She's not as big as the Eisenhower, which visited last year, but she's an imposing sight, nonetheless.

Yesterday Americans in the area were treated to tours by the ship's crew.  They were very gracious and friendly, despite the fact that, were they not showing us around, they would probably have been able to be on shore liberty. 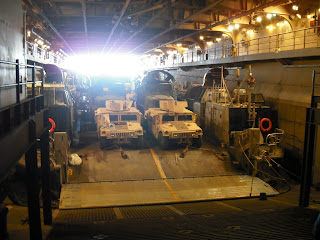 The stern of the ship is open and can be flooded, so that these enormous hovercraft can be deployed. 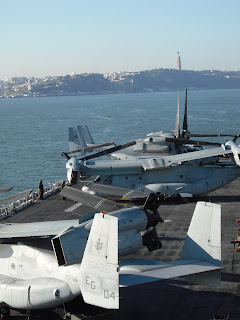 Looking forward over the flight deck, you can see the osprey aircraft.  Beyond them the Cristo Rei statue presides over the Setubal Peninsula. 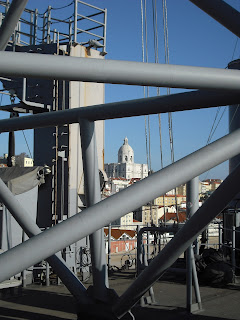 It was such a nice day that I did some walking around Lisbon after the ship tour.  I took a lot of photos of the scenes I want to paint in the Al Fama quarter, which is characterized by narrow alleys and old buildings. 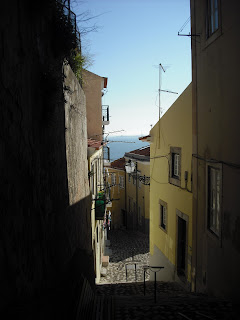 While I was walking around, I couldn't help noticing all the young Americans from the Bataan.  They weren't drawing attention to themselves, but they were unmistakable.  There were three eating at the little hole in the wall restaurant where I had lunch.  They were very quiet and polite, and they wanted to eat authentic Portuguese food, which made the proprietor happy.  They made me feel proud, for some reason, so I secretly paid for their meals before I resumed my walk. 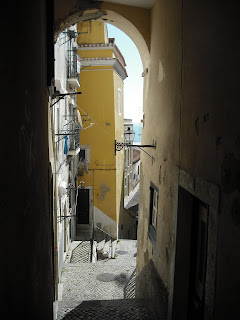 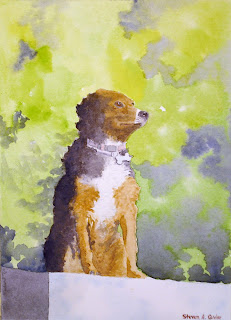 One of the first things you notice if you pass through my neighborhood is Rexi, the dog who lives across the street.  She loves to sit atop her garden wall and keep an eye on things.  I did this painting as a surprise for her owner. 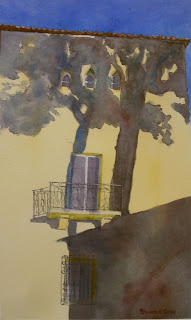 The late afternoon sun throws beautiful shadows on my tower wall.  I've been wanting to paint them ever since I moved in.
Posted by Steven Givler at 10:51 PM No comments: 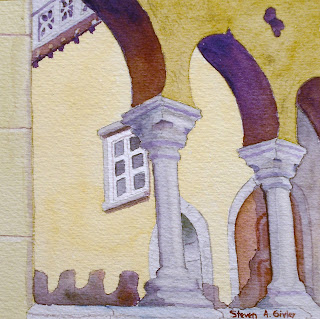 This is the third painting I've done of Penha Palace.  This is a small one - 4 x 4 inches - so it's challenging to get a lot of information in the space available without making it look crowded or muddy.
Posted by Steven Givler at 10:28 AM 2 comments:

Riding with the kids 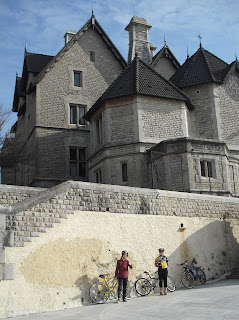 Yesterday was another battle in the campaign against sluggishness.  The kids and I rode our bikes down the hill from our home in Estoril to the sea, and then along the walkway to Cascais.  When I proposed the idea, neither of them was enthusiastic; they wanted to sit around inside, watching cartoons and playing video games.  Once I got them on their bikes and into the sunshine, though, they really had a good time.

Since the weather was so nice, there were a lot of people out walking around, and when people walk on the paths by the sea here, they have no sense of lanes, or traffic, or hey-maybe-I-ought-not-to-lurch-suddenly-from-one-side-of-the-path-to-the-other.  I consider this a perfect training environment for kids who are developing their bike-handling skills.  They have a moving obstacle course to contend with, but no cars to worry about.

Zoe wasn't thrilled about the climb back up the hill to our house, but she's a trooper, and the toughed it out.
Posted by Steven Givler at 2:16 AM 1 comment: 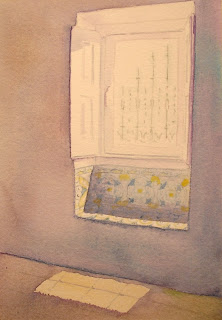 Posted by Steven Givler at 1:49 PM No comments: 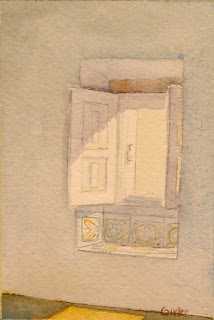 This is a very small (2 x 3 inches) study for what I hope will soon be a larger painting -- if I can just make some time.
Posted by Steven Givler at 2:35 PM No comments: 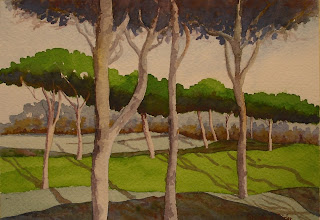 Here's the final version of the painting I started last night.
Posted by Steven Givler at 8:47 AM No comments:

Tonight's painting, which isn't quite finished, is influenced (I flatter myself to say so.) by John Singer Sargent's painting of palm trees: 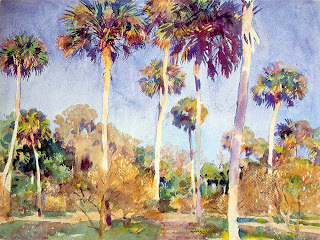 And by a photo I took recently of the Estoril Golf Course, which reminded me a great deal of scenes I saw daily while riding my bike along 17 Mile Drive, in California. 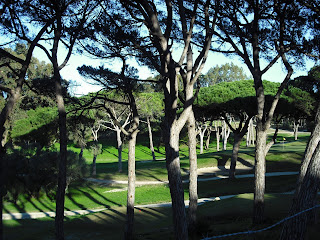 I know it doesn't look like either of them - and it's not supposed to - but it does incorporate things I've learned by looking at each of them. 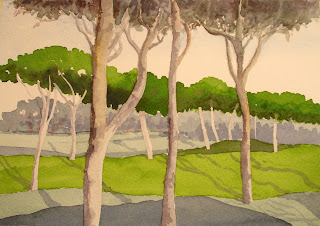 That may be more obvious when I've finished it.  I'll post it when I'm done, and you can be the judge.
Posted by Steven Givler at 3:55 PM No comments:

Clinical Proof: Getting up at 0530 to Run Makes You Happy.

This morning all US personnel where I work were directed to attend mandatory physical fitness training at 0630.  Last night, I told my 13 year old son, Zach, that he would be coming with me.

The Horror.
He could not believe I would inflict such suffering on my own flesh and blood.  He pleaded, he sulked, he moaned.  I would not be moved.  This morning, when I woke him at 0530, there was more of the same; this time, with feeling.  Even so, and I give him credit for this, he was up and out of bed and dressed to run in no time.  He let me know he wasn't happy about it, but he didn't waste time. 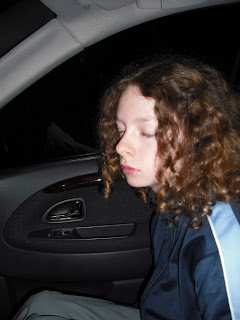 Before the run: Miserable.
We showed up at the dark PT field in time for the 0630 start.  He was the only civilian, and the only person under twenty-something, but he fit right into the formation and did the warmup exercises just like everybody else.  And when we ran, he cruised along beautifully, running his own pace, which started out slowly, but which ended up with him passing quite a few people before the run was over.
He didn't want to get up at that ridiculous hour, and he didn't want to run, but he did it anyway, and when he finished, he had a smile on his face.  As did I.  I'm proud of him. 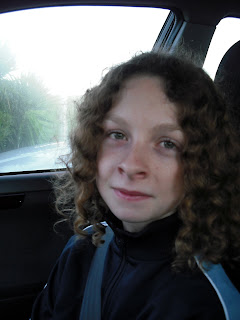 Stupid - Brought to you by bureaucrats

Those fine public servants at the Equal Employment Opportunity Commission have issued a warning that if you are a prospective employer, requiring that job applicants have a high school diploma may violate the Americans with Disabilities Act.

The EEOC is not a legislative body.  It is not empowered by the Constitution with the ability to make laws, so they hasten to warn us that this is only a "warning," that employers, "may" be liable under the ADA if they refuse employment to someone who hasn't earned a high school diploma.  We'll all just have to wait and see what happens the next time someone decides not to hire an applicant who hasn't finished high school.

Who wants to be the first to test that?

So the burden is once again placed on the prospective employer - as if they didn't have enough to worry about.  Not to mention the fact that, taken to extremes, businesses might find themselves having to prove that they are not discriminating against unable-to-finish-high-school-Americans.  Can you imagine filling a quota for non graduates?  Has the EEOC just created an employment niche for people who couldn't hack high school?

As far as I'm concerned, people should be free to hire and fire as they see fit.  If you are willing to go into business or continue running a business in spite of all the obstacles in your path, more power to you.  If you are silly or short-sighted enough to hire based on unjust criteria, your business will eventually pay the price.  We don't need a crushing bureaucracy to try to impose fairness to the detriment of common sense.
Posted by Steven Givler at 11:45 PM 2 comments: