Not Everyone Would Have Been McQueary

A few days ago David Brooks’ New York Times column (I’ll give you two reasons why I’m not going to link it – David Brooks, and New York Times.) tried to make the case that the consistent and widespread acceptance of child rape by Penn State insiders was really not such a strange thing. As Mark Steyn put it, Brooks and others are quick to claim that, “nobody knows,” what they would do if, like Mike McQueary, they were to happen upon Sandusky in the process of raping a ten year-old boy. Brooks’ is not the only article I’ve read recently that suggests that it’s normal – and thus somehow, acceptable – to walk away when confronted with something so clearly abhorrent, because the human mind somehow cannot accept what it has seen, and so chooses to ignore it.


Maybe that’s the way it works in New York high society, but in the world I inhabit, it’s considered neither normal, nor acceptable to ignore an abomination. I don’t know how they rear their young in the big city, but where I grew up, we learned from an early age that we are accountable for our actions, and that, simply by virtue of drawing breath, we incur a responsibility to protect those who cannot protect themselves. We learn it early, and we put it into practice: When you see someone being abused, you do what you can to stop it. In the school-yard, on the playground, in the neighborhood – it’s what you do, even if the odds are against you, and even if doing it gets you knocked around a bit.

You start young, because it’s the kind of thing that goes against the grain. It’s a behavior that has to be learned, and it has to be instituted by practice, so that, by the time you are 28 years old, 200 and-some pounds, and 6-something feet tall, like McQueary, you know that the reason God made you big and strong has nothing to do with football, and everything to do with protecting a ten year-old who’s being brutalized. You don’t run away and call your daddy like McQueary did. You pick up the nearest blunt object, and you brain the man who’s raping the child. I know it’s not a sophisticated world view, and it’s not very nuanced, but I like to think it’s acting in a tradition that is very much worth preserving.

Brooks must get some kind of perverse satisfaction from suggesting that none of us is better than those facilitators of rape at Penn State. Maybe it helps him sleep to think that most people are like him, and need a map to tell right from wrong. I know better though, and I have no interest in preserving his illusions. He is a member of a pathetic minority. Incapable of action on their own, they derive their sense of value from smugness, and they contrive to make themselves superior to the very people to whom they would apply for aid, were they to find themselves in the position of that ten year-old boy.
Posted by Steven Givler at 7:36 AM 1 comment: 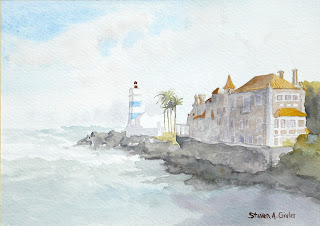 I can see the beacon from this lighthouse from my living room window at night, and I've wanted to paint it ever since I got here.  Unlike every other lighthouse I've seen, this one is completely covered in ceramic tiles, which sometimes makes it gleam in the sunlight.

The lighthouse occupies a point next to a narrow inlet, which is spanned by a small stone bridge.  Sometimes, when the tide is high, kids jump from the bridge into the water below.
Posted by Steven Givler at 5:00 AM No comments:

I finished this painting a couple months ago, but never got around to photographing it until tonight.  It's a larger painting, as watercolors go, at 8 by 28 inches.

This is the view of the fort from the hill where I work.  It's a tough subject to paint, because of its very irregular shape, which only begins to make sense to the eye when viewed from above.
Posted by Steven Givler at 2:56 PM No comments:

This is a little painting of the 25 April Bridge, which spans the Tagus River between Lisbon, and the Setubal Peninsula.  In this view, we're looking northwest, toward Lisbon. 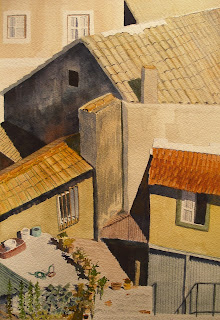 Lisbon was built on seven hills.  On the easternmost of those, you'll find what remains of Saint George's Castle, which is worth a visit in and of itself.  Of greater interest to me, though, are the narrow alleys just outside the castle wall.  Here houses, built more to conform the contours of the land than to satisfy any sense of squareness, run together at odd angles, and throw peculiar shadows everywhere.
Posted by Steven Givler at 12:06 PM No comments:

It's an honor to be named the source of The Camp Of The Saints "Spot-on Quote of The Week" for my comment that,


Gun Walker does prove the need for gun control – applied to the government, not to private citizens.

I don't mention Bob Belvedere and the good work he does at TCOTS nearly often enough, so please help me atone for my shortcomings by visiting his site and availing yourself of his insightful commentary.
Posted by Steven Givler at 10:47 PM 1 comment:

Here's Something You Don't See Every Day

This was sent to me by a friend in the States, but the song is Portuguese (Don't ask me to translate.) as is info on their website, so I suspect they're from somewhere around here.  Either the cat or the owl could kill the other easily, so it's amazing to see them play like this.
Posted by Steven Givler at 12:40 PM 2 comments:

For Want of a Nail - The Collapse of Law and Order

Back in March I wrote about the importance of taking care of the little things, and allowing the big things to take care of themselves. I was talking about law enforcement, and the emerging scandal now widely known as Operation Fast and Furious, or, less commonly but more accurately, The US Government Assistance Program to Mexican Drug Cartels.


My point was that law enforcement does its job - keeping people and their property safe – best by doing the small, unglamorous tasks like ensuring people stop at stop signs and drive at speeds that do not endanger their neighbors. Doing these thankless little things makes their jurisdictions less comfortable for criminals, who seek greener pastures elsewhere. It also makes those areas better places to live for law-abiding citizens.

As I mentioned in that post though, the trend in law enforcement seems to be away from those mundane tasks, and toward more exciting missions to nab higher-profile criminals – to worry less about the small, simple stuff, and to focus more on complex operations that require special tactics and training. Door-breaking is spectacular, you know, while walking a beat is not.

I suspect that a large part of this is due, not to shortcomings on the part of police, but to political pressure from politicians. It's easy for politicians to hassle cops, and they generally get a free ride for doing it. When some city councilman accuses the PD of being too hard on vagrants, for example, he comes out smelling like a rose because he's standing up for the little guy. Nobody cares much what happens to the cop, and people care even less for the person whose porch or garage the homeless person was camping in. It's a small price for that property owner to pay, after all, as long as it’s not you or me - even if that vagrant was using said private property as a combination urinal, opium den, and brothel.

Now, however, we are beginning to see the longer-term effects of this trend. The Occupy Whatever crowd has exploited the law and order gap. Cities in which politicians have made it difficult for cops to enforce vagrancy and loitering laws that they themselves voted into effect, are seeing some very ugly chickens coming home to roost in their parks and on their street corners. What used to be a handful of homeless people here and there has now, with the help of some radical organizers, devolved into the howling mobs that shut down the Port of Oakland, block traffic in DC, and fling blood and feces at businesspeople who refuse to give them free food.

At some point, the people who work and pay taxes will make it known to the politicians that this is not satisfactory, and those politicians will turn to the very police whose jobs they made so difficult, and insist that they reestablish order.

The response will play right into the hands of the radicals, who will drive the situation to violence. Shields and helmets, teargas, and truncheons will be the order of the day, and the leftists will be sure to make the most of it. Every instance of physical force, no matter the necessity, and no matter the prelude, will be presented to the public as an example of police brutality. The images will be shown over and over by mainstream media, grateful for any evidence, no matter how artificial, that enforces their agenda.

The pity is that this was all preventable. It started small, and that’s when it should have been addressed. Those little laws directed at minor infractions like vagrancy, loitering, and blocking public by-ways exist for a very important reason – to protect the safety of individuals and to provide for the security of their property. When police don’t enforce them – either by choice, or because politicians make it impossible to do so, the consequences are disproportionately large.

Unfortunately, the lesson likely to be taken from this mess is that police forces need more specialized training and more paramilitary equipment or, worse yet, more intervention by federal agencies. This is the opposite of what should happen. Law enforcement must, instead, be allowed to return to what it should always be in a republic – small, local, and focused on the little things. Then the big things will take care of themselves.
Posted by Steven Givler at 8:24 AM 3 comments: 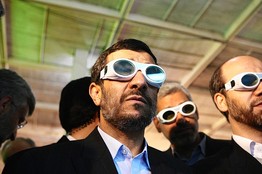 Mahmoud (Mo Jad) Ahmadinejad, rapper extraordinaire and part-time President of Iran, has announced his support for the controversial law mandating conservative underwear for the women of his country.


Last month, street protests greeted the announcement of the mandate by religious authorities, and even ultra conservative Shi’ite leaders questioned the wisdom of the law, asking how it could be enforced.

MoJad though, who has always infused his rap videos with the latest technology (Almost all of his videos this year were shot in color, and industry leaders say there is a rumor of an upcoming 3-D video for the title track of his much anticipated album, “Imam of Slam.”) has advanced the idea of the ban, insisting that the law can be enforced, not only at the point of sales, but also by patrols equipped with special “X-ray Spectacles,” which he ordered from the back pages of a western magazine he acquired during his latest concert tour.

The trend-setting leader even volunteered to lead the first patrol, which he referred to as a “panty posse,” graciously donating his precious time to stamping out vice, and defending the world-famous virtue of Iranian women.
Posted by Steven Givler at 7:15 AM 1 comment: