Communists and Unions? Say it isn't so! 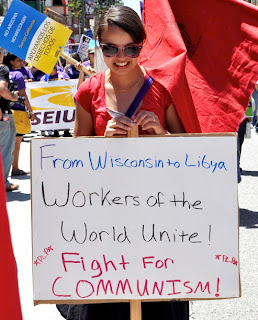 This charming communist might need to be sent for reeducation even before the capitalists go.  Maybe then she'll understand that the "workers" in Libya are about as far from Communism as they can be.  Then again, history was never a favored topic of the great Communist thinkers - at least, not as it actually happened.

This is one of several signs posted by Reaganite Republican from a May Day march in Los Angeles this spring, all of which demonstrate the close ties between some of the nation's leading unions and the various factions of the Communist Party.

Here in Portugal, it's not uncommon to see banners bearing the hammer and sickle, and to find advertisements along the roadsides for Communist and "Progressive" festivals and marches.  Back in the States though, at least when I used to live there, it seemed people were less likely to buy into all that nonsense.

Even if they hadn't read works like Milton Friedman's Free to Choose, and Capitalism and Freedom, (both of which I highly recommend) Americans seemed to have an innate understanding that Communism works only if it can strip away everything that provides an incentive to human beings to work hard and be productive.  We also seemed to appreciate that a byproduct of that process was a drab, joyless existence, dominated by distrust and envy, and regulated by an all-encroaching government.

If we're losing that understanding, or if we are deluded into thinking that unions in their present form are not Communist entities, then these photos, which I found via Maggie's Notebook, ought to help.
Posted by Steven Givler at 4:34 AM