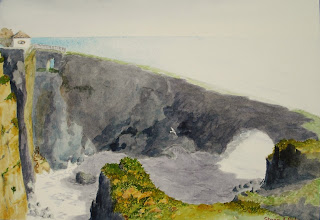 Just up the coast between Cascais and Guincho lies the mouth of hell.  Personally, I would have expected it to be a lot closer to Lisbon.
Posted by Steven Givler at 1:02 AM No comments: 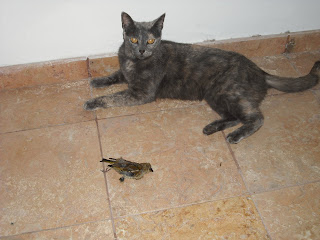 Kiki brought us another present.  I can tell you, it's a real comfort knowing she's on the prowl at night, protecting us from deadly songbirds and lizards and whatnot.

At least she showed us this kill before dismembering it in Zoe's bed.
Posted by Steven Givler at 1:01 AM 1 comment:

Just a quick note, as, here in Portugal, the Fourth of July is not a holiday, and I have to get back to work.  Think about revolutions in general, and ours in particular.  What is the major difference?

In most cases, revolutionaries have little to lose.  There may be educated leaders among them, but most of the risk is borne by people who own little to begin with, and whose only hope to gain something lies in the process of overthrowing their government.

In the case of the US revolution, the men who led started out with everything to lose.  They owned land.  They were prosperous businessmen and professionals.  They had families, both in the colonies and back in England.  Many of them had cordial relations with the king.  Life was good to begin with, but they saw the possibility of something better in their future.  In their eyes, liberty was worth the risk of their "lives, fortunes, and sacred honor."

I may be working today, but that doesn't stop me from celebrating that difference.
Posted by Steven Givler at 1:50 AM No comments:

This is Zoe's little cat, Kiki.  I've posted about her before, back when she was happily devastating the shrew population.
We seem to have run out of the diminutive rodents, at least for the time being, so instead, Kiki has been bringing us assorted lizards, whole, or in parts.  Tails, mostly.  We still have plenty of lizards sunning themselves here and there, but you rarely see one with its tail intact.  I think the ones we do see must be tourist lizards.  They're certainly not from around here.

Kiki, of course, is proud of her lethality, and likes to be credited for her kills, so she brings them to us.  To make sure we notice, she usually leaves them someplace prominent.  Did I mention she's Zoe's cat?  That's why, when Zoe pulled back the covers on her bed the other day, she found a carnage of feathers - not goose-down feathers, like you'd expect to find in a bed, but flight feathers, wingtip and tail, spread from pillow to footboard, accompanied by a nice dusting of little fluffy grey ones.  Apparently it wasn't enough to kill the bird and display it; Kiki also had to dismember it.  (You never can be sure if they're dead if you keep all the parts together.)  Zoe took the shock well.  I washed her sheets.

Tonight though, she found this on her bed:
No tiny shrew, this, and no fluffy bird, either.  I photographed this rat with a 6-inch ruler, so you can get an idea of his size.  He's almost as big as Kiki.

Zoe's not so sure at this point that Kiki is bringing her trophies out of affection.  We've begun to suspect that in her nocturnal ramblings, she's taken to watching old movies.  Maybe she recently saw "The Godfather?"

I'd write more, but there are sheets to wash.
Posted by Steven Givler at 2:43 PM 4 comments: