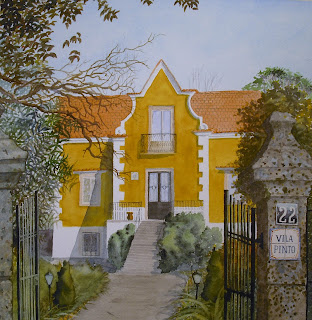 I've had the flu for a week now.  I went back to work twice, thinking I was well enough, only to regret it when I felt even worse than I had before.

I remember an old Peanuts cartoon strip that said, "Happiness is being too sick for school, but not too sick to watch television."  My pesonal version of that would be that happiness means being too sick for work, but not too sick to paint.  It would have been nice to have felt well enough to paint, but for the most part I was too miserable to manage more than 10 or 15 minutes at a time.

Still, over many minute sessions, I finally managed to finish this painting, which has been languishing on my table for several weeks now.
Posted by Steven Givler at 3:05 AM

I hope you got well! I'm still following your blog via rss. I enjoy your paintings very much (this one is a masterpiece)! Your writings are often beyond my English attainments, but I have surely learnt a lot about the world from you. Thanks for it!
I wish you the bests,
János

I hope you're up to spec soon.

It's great to hear from you after all this time. I'm happy to know you're still visiting. Thanks for writing.

Thanks Ran, I'm getting there.