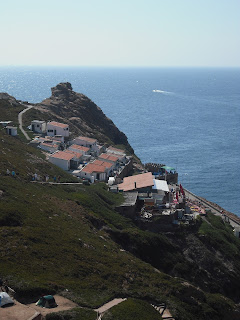 Berlenga Grande is the largest of the Berlengas Islands, which isn't really saying much.  With a tail wind, a thrower with a good arm could just about lob a rock from one end of the island to the other.

The island appears in this photo to be surrounded by a placid sea, but on the 20 minute boat ride last year, nearly everyone got sick.  I managed somehow not to succumb, so I was able to witness the spectacle of people scrambling for the small plastic bags handed out by the captain and his crew. 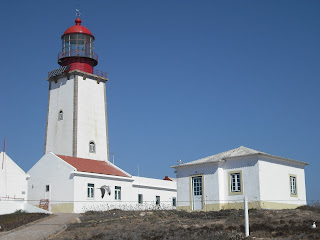 Atop the island is a very paintable lighthouse.  In early days, the only buildings were associated with a monastery, but the monks got tired of frequent raids by pirates and headed elsewhere. 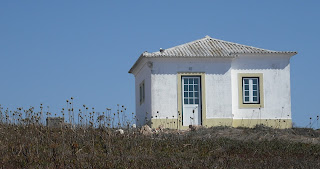 I'm looking forward to painting this building, which is part of the lighthouse complex. 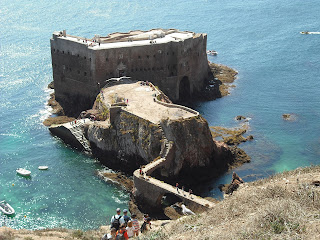 Below the lighthouse is this fortress, which didn't do the monks much good apparently, and which, instead of protecting the mainland from marauding Spaniards, eventually was captured by them, and became a base from which they operated.  The waters around the island are restricted from fishing, and in the deep clear lagoons on either side of this fort, you can see large schools of fish.
Posted by Steven Givler at 2:58 AM

Thanks for the travel updates. Stuck here in winterville, they sure cheer us!

"I managed somehow not to succumb [to sea-sickness.]"

Pilots and navy men tend to be "used to" motion stimulus.

I'd add another group: Folks who are frequent passengers in my car. (Newbies have a tougher time.) Then again, can't say it's the motion stimulation, the smell of burnt rubber, the wreckage occurring behind us or the sound of metal-on-metal as I squeeze between trucks.