Painting of the MacArthur Memorial 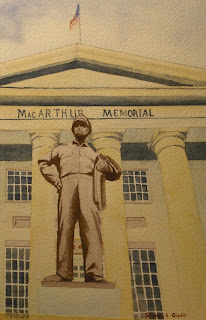 Yeah, I put the title up on the headline of the post, just in case you couldn't tell what it's supposed to be.

I painted this as a gift for my class to present to the guy who gave us a tour of the memorial.  He started working there as an archivist when he was in college.  That was twenty years ago.  He's probably handled every artifact and read every document that ever belonged to or was written by, to, or about MacArthur.

He doesn't usually give tours, but he was kind enough to take my class through the memorial, and he was awesome.  He looks a lot more like a guy you'd expect to see sitting astride a surfboard than one who would work in a safe doing research and cataloging documents.  He has long, wavy blond hair and wore white shirt and pants with a black vest and tie.  He looked kind of like Andy Gibb from a distance.

When he spoke, he sounded a lot more like a surfer than an archivist or a Gibb brother.  He used a lot of very unarchivist sort of words like "Whoa" and "Dude" as in, "So Doug MacArthur goes to Truman 'Like, Whoa!' and, you know, Truman goes, like, 'Dude!''

I know that sounds irreverent, but it was anything but.  You really had to be there. His knowledge was encyclopedic,  but more importantly, that knowledge was informed by a very deep empathy, and an abiding respect for the General and his wife.

His skill was such that, by the end of the tour, we all shared his respect, and we were grateful to him for passing it along to us.  Hence, this painting as a thank-you gift.
Posted by Steven Givler at 8:06 PM

Hey, I hope the country repays you by counting your vote.

Thanks again for everything.