Weekend with my Dad 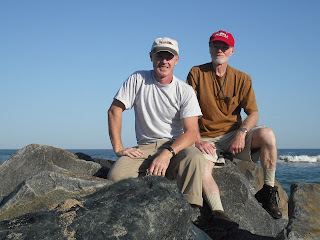 Aside from lunch together two or three years ago, I think it's been about 5 years since I've seen my dad.  Between deployments, overseas assignments, and just plain living, it just hasn't been possible for us to get together.

Since I'm in the States for a while now, we made plans to meet this weekend in Ocean City, Maryland.  We didn't pick Ocean City for any particular reason other than it was roughly half-way between us, and Dad hadn't been at the beach in a while.

What we didn't know was that the small town on the barrier island would be the scene of a huge get-together of motorheads, cruisers, and hot-rodders, and that we would be lucky to find a hotel room.  We found one though, and after we'd dropped our stuff in the room, we headed for the beach, where we walked about 3 miles before we realized it, just talking and catching up.

By the time we headed back, we were already getting hungry, but that didn't stop us from stopping every few minutes and gawking at the amazing cars driving up and down the strip. 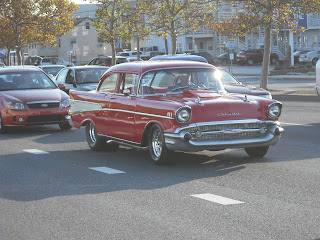 Here's a beautiful 50's era Chevy - one of dozens that we saw. 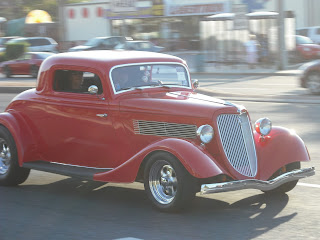 There were also loads of Fords, Willys, Pontiacs, Dodges, and all kinds of other makes, not just from the 50's but also from the 20's, 30's, and 40's.  Dad was a lot better at guessing the year and make than I was.  He also told me some stories I'd never heard before about cars his Dad and Grandfather used to have.

The next day we got up and had eggs and pancakes at a place just down the street.  After we ate, we walked back along the water on the inland side.  We saw some fishermen and some boats, and that got Dad thinking about one of his favorite things, which is tug boats.  We decided to drive down the coast and see if we could see some.

On the way to what we thought might be a likely spot though, we got sidetracked.  All traffic was being routed around what ended up being the big car exhibit.  Once we figured that out, we had to take a look. 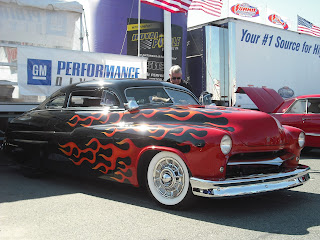 With or without a flame paint job, cars like this are my favorites; they have a low, curvy, powerful look that really appeals to me. 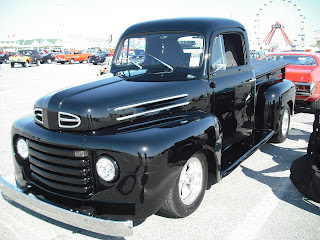 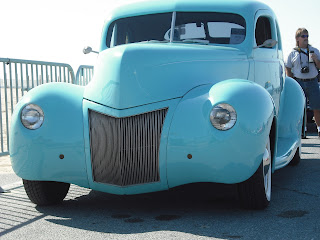 Here are more great examples of some of the kinds of cars I like. 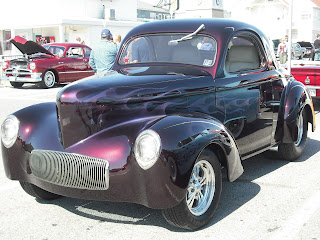 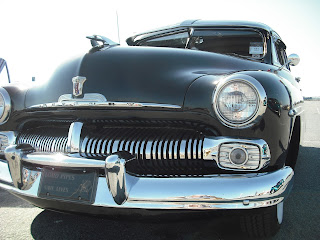 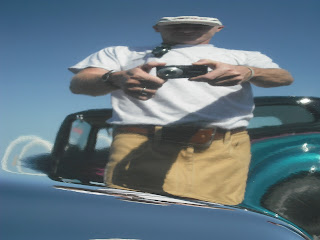 And talk about paint jobs - I shot my reflection in this paint and it was like a mirror. 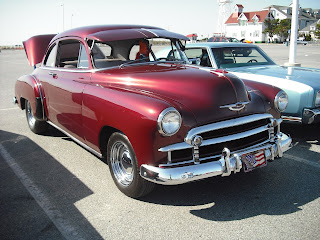 After we'd been looking at cars so long they were beginning to look alike, we resumed our search for a tug boat.  We headed over to the mainland, and as we crossed the bridge, I saw a tug alongside a barge in the channel.  I turned in that general direction, hoping to find a road that ran along the water's edge, but we did even better than that.  We drove right up to a small inlet where, among the fishing boats, I caught a glimpse of the red and black superstructure of a tug.  We parked and tried to get next to the water, but there were fences and No Trespassing signs everywhere.  I saw a man working next to one of the fishing boats and asked if we could come through the gate and take some pictures.  He said we could, and I got this picture. This was OK, but we were both wishing we could get out onto that pier.  We found another man working at one of the fishing companies, and he said we could walk through and go out onto the pier, as long as we were careful.  We headed out and looked around.  Dad was psyched.  He said, "This is the closest I've ever been to a tugboat." 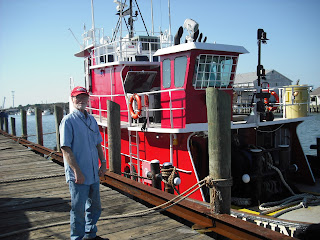 We didn't expect it to get any better than that, but as we were about to head back to the truck, this guy stuck his head out of the tugs's pilot house and said hello. 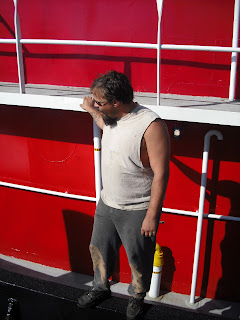 We told him we were admiring the boat, and he invited us aboard.  His name is George.  He gave us the grand tour of Tug Boat Cajun, out of Norfolk, VA.  He said the boat was finished 22 June, 1976.  He said he was born on 24 June of the same year. 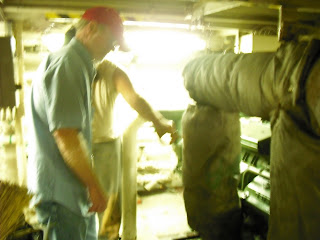 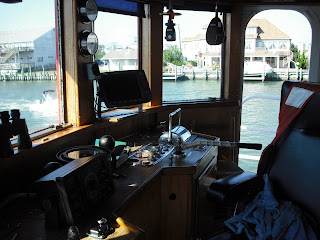 And here's a view inside the pilot house.

It would have been a great weekend without the cars or the boat.  It had been way too long since I'd seen my Dad, and just getting to catch up a bit was all I could have hoped for.  The cars and the tour made it all that much better.

Thanks for meeting with me Dad.  Let's do it again soon.

Posted by Steven Givler at 6:11 PM

Looks like you two had a really special weekend. I would've enjoyed the cars too. And, I really like your latest painting!