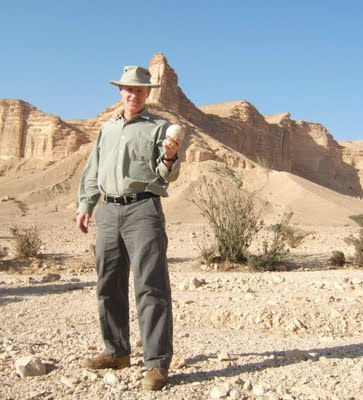 Ever heard of a bezoar stone? It's a mineralized hairball sometimes created by the digestive systems of ruminants like cows, llamas, or, in this case, camels. I'd been looking for one ever since my last camping trip, which was back in April or May. Today I just happened to be telling my friend Paul about them as we were driving across the desert west of Riyadh. "Keep your eyes open for a softball-sized sphere," I told him, "Kind of like that one right there."
Sure enough, next to the skeleton of a camel or a goat (Yes, I know there's quite a difference between camels and goats, but there wasn't much left of this one so it was hard to tell.) this fine specimen was shining in the sunlight.
Apparently, these were much sought after in ancient times as an antidote for poison. Unlike some remedies, these actually have the ability to remove or neutralize arsenic, according to this source: http://curiousexpeditions.org/?p=371#comment-6346
How about that? Now if anyone ever tries to slip me an arsenic mickey, I'll just dip my bezoar stone in it and I'll be just fine. Now if I could just get it to fit into my pocket...
Posted by Steven Givler at 9:52 AM

Sweet picture. You can name it "Yorick"!

"Alas, poor Yorick! I knew him, Horatio: a fellow
of infinite jest, of most excellent fancy."

Thanks for your service on this Veterans Day.

Donald, I count it a great privilege to be able to do so. Thanks for stopping by.

...b-b-but, how do you attach it around your neck? And- just in case...do you have to ingest it to counteract the arsenic? -Inquiring minds want to know! -Karin

On an enormous gold chain, of course! And apparently it just absorbs the arsenic right there in your cup; you don't have to ingest it.

Thank you CS, and thanks for stopping by.

[Although we've corresponded by email in the past, I didn't find your email address here, so I'll do this in comments!]

I've chosen you for a Kreativ Blogger Award.
Please check out my post to pick it up.
http://bfbutler.blogspot.com/2009/11/kreativ.html
Congrats,
Bonnie

(Ha - my word verification is conis.)

Bezoars are mentioned in the Harry Potter series as poison anti-dotes.