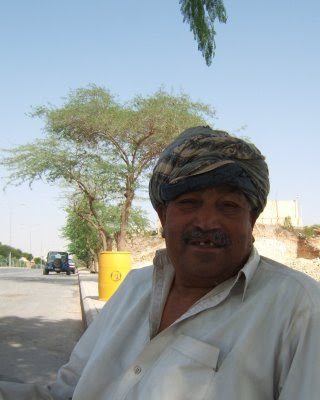 This man was sitting on the curb next to his bicycle the other day as I drove by. I turned around and parked and sat next to him for a while. He thought I was a doctor and told me he'd like a job in the nearby hospital. I told him I worked at the U.S. Embassy, and he decided that Embassy work would suit him much better.

While we talked, a pickup truck filled with picnic coolers pulled up next to us. A man got out and removed several cartons of milk, tubs of yogurt, and other dairy products from a cooler. He gave them to this man, who put them in the basket of his bicycle and set out to deliver them. It was about 110 degrees. I wondered if there would be much difference between the milk and the yogurt by the time they reached their destinations.