Camel Roundup on the Road to Dhahran

Yesterday I drove from Riyadh, in central Saudi Arabia, to Dhahran, on the east coast. Along the way, I happened across this camel roundup in progress so I stopped to take some video. 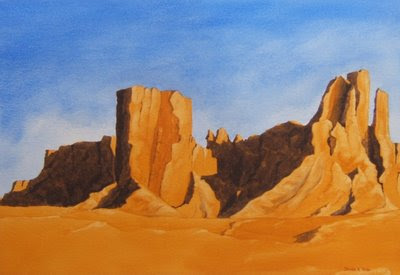 As you keep heading east from Jeddah, the landscape changes from the dunes of the painting below, to a high escarpment that marks the plateau upon which Riyadh is located. After 8 hours of driving we reached the tall cliffs at the perfect time, just as the evening light was painting them golden. Even if it had been the only scene worth seeing on the entire trip (and it wasn't) this would have been worth it.

Posted by Steven Givler at 11:01 AM No comments:

It was a two-painting weekend (Thursday and Friday are the weekend here.) even though I had a lot of other things going on. Here's the first one I finished. This is from a quick photo I snapped out of the window as we drove from Jeddah to Riyadh a couple weeks ago.
Posted by Steven Givler at 10:58 AM No comments:

Camels Along the Mecca Road 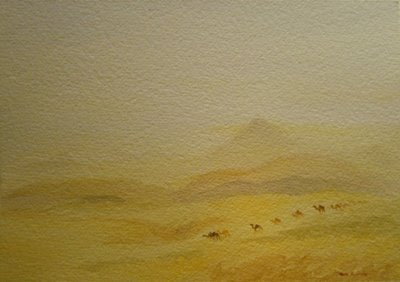 This isn't the best photo of today's painting, but it's night now, and I don't have the natural daytime lighting I like to use when I photograph my work. The studio lighting makes it difficult to get a true representation of color, and it picks up the texture of this rough paper that I like to use. Still, I'll post this photo so you can see what I've been up to today.

This is Why I Keep the Bathroom Doors Closed.

And the reason the cats aren't allowed in my bedroom.

Posted by Steven Givler at 8:36 AM No comments:

On The Mecca Road 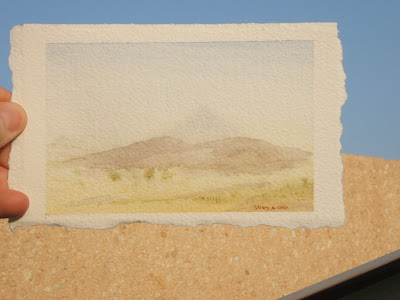 I took a bit of a break from portraits today, and did this small painting of a landscape I saw on the way back to Riyadh from Jeddah, an 8 hour drive (at 110 mph) on the Mecca road.

Posted by Steven Givler at 7:02 AM No comments:

Can you see a difference? 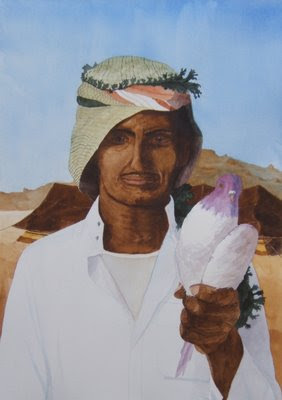 From here on, finishing the painting is (I hope) a matter of subtle changes. This one has been a little trickier than most because, unlike in the photograph that provided the inspiration for this painting, I wanted the subject to be lit from the side. In the photo, the light was directly behind me as I took the picture, which didn't allow any dramatic highlighting of the subject's features. As I began painting, I decided to have the light hit the subject from the left side of the painting, which (I think) makes it more interesting, but it also makes the job more challenging, because now my model, aside from serving as an example of basic structure, is of little use.

I have to go out on a bit of a limb and figure what parts of the face would be highlighted, and which in shadow. Of the places left in shadow, I have to determine the nature of that shadow, and then try to represent it from the image in my mind.

Shadows pose all kinds of challenges, but also provide great opportunities for conveying information that would be otherwise impossible. I suppose you could say that shadows are to a painting as a narrator is to a story. In some cases I don't even paint an object, but paint only its shadow, and that conveys a more vibrant image than if I'd tried to represent the object itself.

Of course, to do that you have to spend a little time observing shadows. (I don't suggest, by the way, that I'm any kind of expert at this; I write these notes just to let you know the kinds of discoveries I'm making as I paint, not to give you the impression that I actually know what I'm doing.) There are the kinds of shadows that cling to the dark side of an object as it curves away from the light. These are different from the kinds of shadows that are cast by an object with a definite edge. Getting the difference right when you paint the shadows helps you say a lot about the shape of the object that you're trying to represent.

Well, I don't know if any of that made any sense to you, but it's a good example of the kind of stuff I'm thinking while I'm painting. That is, if I'm thinking at all. Sometimes I'm just humming "Lawyers Guns and Money" by Warren Zevon, or watching my cats reach their little paws under my studio door, as they try to lure me away from my brushes.
Posted by Steven Givler at 5:51 AM 2 comments: 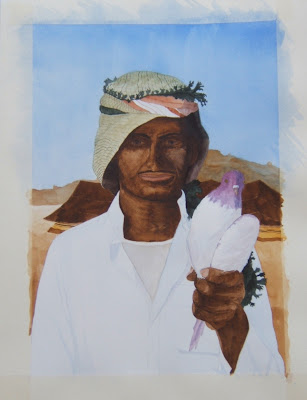 Here's how my painting looks now.

Posted by Steven Givler at 5:53 AM No comments: 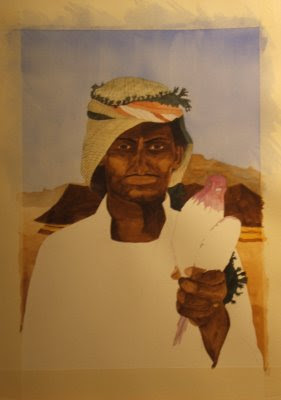 Thursday and Friday are the weekend here, so I had today off. Aside from a ride on my mountain bike, here's how I spent the day.

There's a lot of work left before this is finished, especially lots of shading on the face and hand.

You may notice that I changed the background from the photograph; I like the desert and a bedouin tent better than the camel souk.
Posted by Steven Givler at 9:57 AM No comments: