Two Views of the Smithsonian Institution 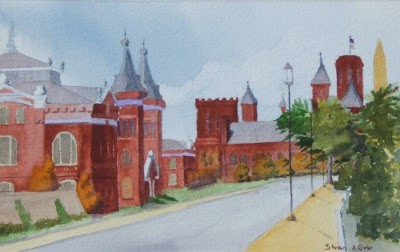 These are two views of the Castle - the original home of the Smithsonian Institution. The building is wonderfully complex, and can lead to severe mental problems for anyone who tries to copy every detail. 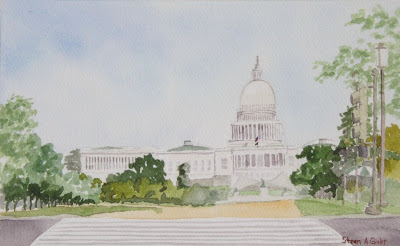 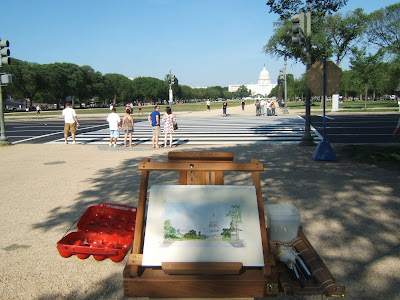 On Memorial Day I headed to the National Mall, and after the big parade, I did this painting of the Capital Building. There was a large tent-like bandstand in front of the building, and I was tempted to leave it out of the painting, but it was there for the Memorial Day festivities, so I painted the scene as it was.

Posted by Steven Givler at 11:24 PM No comments: 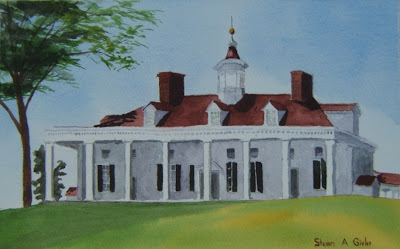 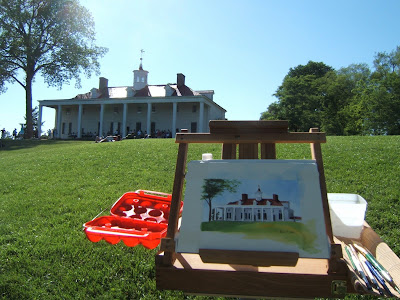 My family came up to visit me for the week leading up to Memorial Day and we had a great time. I didn't do much painting, except on the day we spent at Mount Vernon. While the family toured some of the grounds and then got in line for the tour of the house itself I did this painting of President Washington's house as it appears from the river side.
Posted by Steven Givler at 11:19 PM No comments: 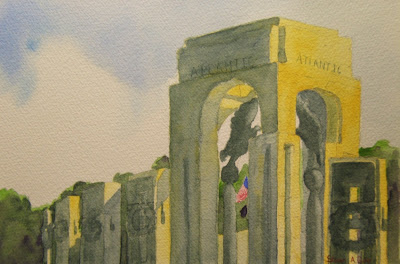 The World War Two Memorial is enormous and very complicated. This is a veiw of the arch that commemorates the Atlantic Theater. While painting this, I was surprised to see that I was being filmed by a camera crew. After a while a woman introduced herself as a journalist for Russia Today, and asked if I would mind being interviewed. We talked about the Atlantic campaign, which I think is a great historical model for our current campaign in Iraq. After all, some people questioned the wisdom of fighting the Germans in North Africa, and then Italy, when it was the Japanese who'd attacked us in the Pacific. I explained that the location wasn't nearly as important as the concept of drawing Hitler's forces to a place where we could fight them. Although our losses in Italy were astronomical and our gains were pitifully slow, we forced Hitler to commit 14 divisions to the fight. That's 14 divisions that would have been fighting in Russia or opposing our forces as they landed at Normandy.

That brought up the question of my impression of Russia's contribution to the war, which, I suspect, was the real reason for the interview. The crew seemed surprised that I knew how important Russia was to the effort, and that I was aware of the tremendous sacrifices - probably in the millions of lives - made by Russia. The interview should be posted in Youtube relatively soon. Just search for Russia Today. 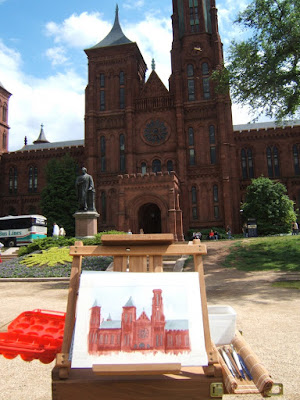 The weather has been terrible lately; heavy rain for the last few days. Still, I managed to get out yesterday to do this painting.

Posted by Steven Givler at 9:03 AM No comments: 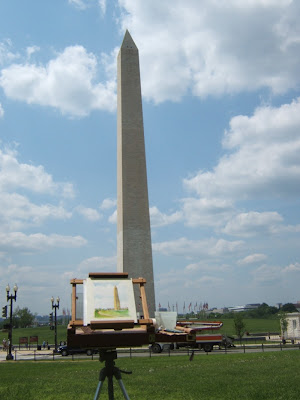 After work today I got two paintings done. This view of the Washington Monument was the first. It found a home right away with a guy from Tennessee.

Posted by Steven Givler at 7:17 PM No comments: 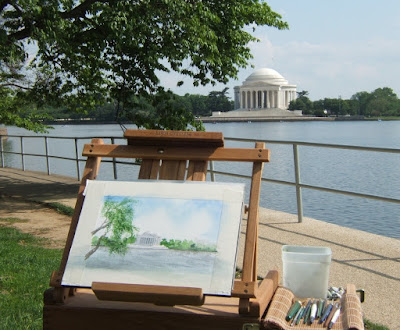 After I painted the Washington Monument, I did this view of the Jefferson Memorial
Posted by Steven Givler at 7:10 PM 1 comment:

Painting for my Supper 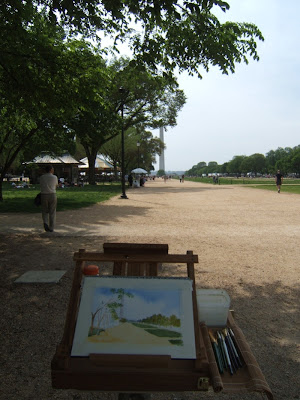 The weather here in D.C. has been lovely. I bought myself a camera tripod and fixed my french easel to it so I could do some painting outdoors and headed for the National Mall.

I found a nice shady spot and painted this view of the Washington Monument (It's not finished in this photo.) and when people passed by I explained that I was painting for my supper. I said that I'd sell the painting before I left for the day, and whatever the painting brought would be my budget for dinner.

Not only did I meet some very pleasant people, but I ate well last night. I'm heading back this afternoon.
Posted by Steven Givler at 6:39 AM 3 comments: