Weekend with the Commemorative Air Force 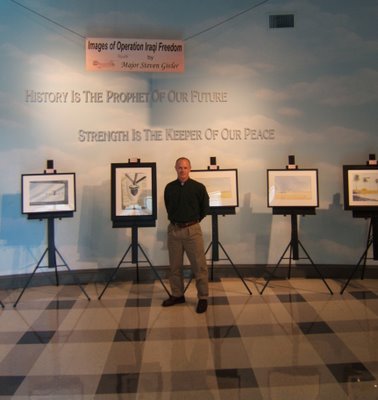 I had the honor this weekend of visiting the good folks of the Commemorative Air Force, in Midland, Texas. The CAF restores old military aircraft and flies them in airshows all around the country. If you've seen movies that featured WWII aircraft (such as The Battle of Britain) then you've seen some of the fantastic work done by these dedicated people.

The American Airpower Heritage Museum, a part of the Commemorative Air Force, opened a display of some of my paintings while I was there, and on Veteran's Day, of all days, I was privileged to be the final speaker of this year's seminar series. I talked about why we should be proud of the young Americans fighting for us in Iraq, and about the great and necessary things they are accomplishing there.

I got to climb into the cockpit of a Me-109, as well as that of the sole remaining airworthy B-29. By 1946, 4,000 of these magnificent aircraft had been built, but today, only one is still flying. The CAF could use some help maintaining this beautiful piece of flying history. If you'd like to make a contribution, please click above where it says, "Weekend with the Commemorative Air Force."

As great as it was to see my paintings in a museum, and to plant my bottom in some fantastic aircraft, nothing compares to the warm and generous people I met while I was there. Scott Davis and Bill Coombes took fantastic care of me, and their wives, Gretchen and Elise, set out spectacular dinners. In a little less than three days I was thoroughly spoiled.
Posted by Steven Givler at 9:49 PM