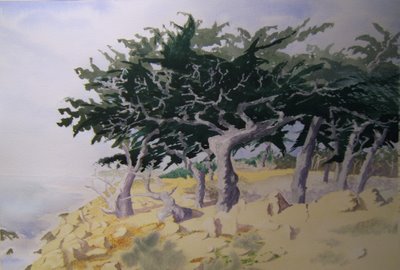 Here's another painting I'm working on based on the same view as the painting below. At 12 X 18 inches, this piece is quite a bit bigger. I still have lots of detail to add, but it's been so long since I've posted that I figured I'd better get something up.

I've been pretty busy with school lately; we're coming into the mid-term stretch of the final quarter of my master's program. On top of that, I've somehow managed to break my right foot. I believe it's an old injury - old as in about 6 years ago - that has long since ceased to bother me, but it came to light in an X-ray taken because of a recently torn plantar facii, which is a fibrous tissue on the underside of the foot, kind of like a tendon or a ligament.

The tear would have healed itself over time, and the fracture had long since ceased to bother me, but my surgeon said it was the worst fracture of its type he'd ever seen. The bone in question, the sesamoid, was in 6 pieces, and he thought it would cause me trouble at some point in the future, so he removed them all. Now I'm hobbling around with my right foot in what looks like a deep-sea diver's boot. The worst thing of all is that I'm unable to drive. I believe I'm fully capable, but my surgeon, and more importantly, my wife, insist that I shouldn't. A sudden stomp on the brake could pop a stitch or two, and that would be a problem. I'm tempted to chance it, but the last time I disobeyed my wife I was struck by lightening, so I'm trying to behave myself and allowing her to drive me everywhere.

It looks like friends from the local art community are putting together a website to show my paintings. It's still a work in progress, but you can see how it looks so far at: www.stevengivler.com
Posted by Steven Givler at 7:32 PM