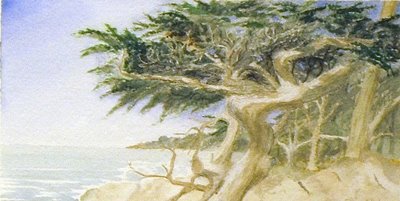 Done. Photographing this might have been more difficult than painting it. I had a terrible time getting the colors to show up; they're still not quite right, but I think this is close enough to give you an idea of what the painting looks like.
Posted by Steven Givler at 12:16 AM 2 comments: 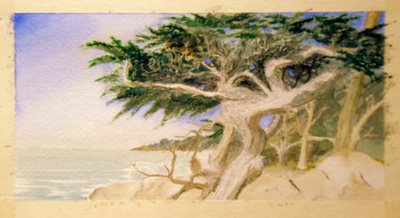 Here's the painting I'm currently working on. I've a ways to go yet, but I think you can get a general idea of where it's heading. I haven't done any masking on this one; just left blank the places I want white. Some of the small branches are just too tiny to mask with strips of tape. Occasionally I use liquid masking, but I didn't feel like it on this project. Hopefully I'll finish this tonight.
Posted by Steven Givler at 12:08 PM 1 comment: 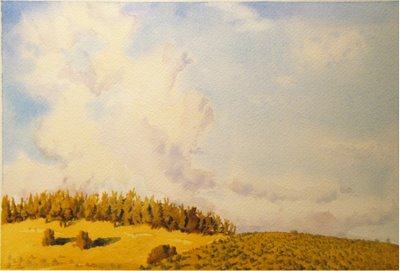 Here's tonight's painting. I wanted to capture the golden light and long shadows of summer evenings here in Carmel Valley.
Posted by Steven Givler at 9:04 PM No comments:

Here's a little painting I did tonight. I've had a couple ideas floating around in my head about how to do foregrounds and this was a test for one of them. I think it turned out well.

The rains are finished here until fall, and the hills and canyons are covered now with dry, golden grass. This is mountain lion country, and it's easy to see how a big cat could glide along unseen while stalking its prey; the grass is a perfect match for the color of a lion's coat.
Posted by Steven Givler at 12:26 AM 2 comments:

I went to an artist's reception last night at the Carmel Art Association. My favorite
works there are watercolors (go figure) by Miguel Dominguez. You can see some of
his work here:
www.portnoygalleries.com/migueldominguez/migueldominguez.html
and here: www.carmelart.org/artists_new.html


I also entered three paintings in next month's Monterey Fair. Carmel Valley,
South Ridge, and Fort Ord will be in the juried landscapes division, and Red Steer is
entered in the juried "figures, portraits, and animals" division. This is the first time
I've submitted entries to a juried competition - or to anything else, for that matter.
Wish me luck.
Posted by Steven Givler at 7:44 AM No comments: 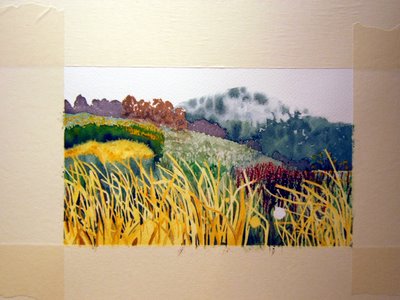 Here's what I've been working on for the last few nights. The grasses and flowers along the coast here have been spectacular lately, especially against a backdrop of eucalyptus and foggy hillsides.

This has been a particularly time-consuming project because each blade of grass in the foreground had to be masked with a thin strip of tape before the background was laid in. I still need to work some shadows and edges into the foreground. The two tennis-ball looking things in the front will be seed puffs like you find on dandelions.

I'm putting a lot of emphasis on vivid color in this painting, which isn't something that comes naturally to me, and it's not the easiest thing to do as far as watercolors are concerned. Still, I'm having a lot of fun with it, and I'm pleased with the way it's turning out so far.
Posted by Steven Givler at 11:47 PM 3 comments: 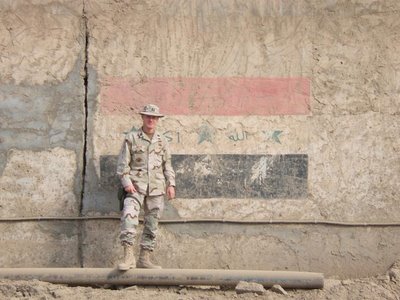 Independence Day is the answer to the Dixie Chick's musing about "why
patriotism is necessary, anyway."
The founders, well educated in both the Bible and Western Civilization,
combined the two, winding up with the radical notion that nations ought to
exist, not to ensure the rights of their rulers, but to protect the rights of their
individual citizens, since it was those individuals in whom God invested rights.
This notion remains radical, even today.
Even in our tarnished state, the United States remains the greatest
representative of the notion that people are endowed by God with their rights,
and that the sole responsibility of government is to protect those rights. That
is why people still risk all to travel not to Cuba, not to China or any other
worker's paradise, but to the United States of America, and that is why I am
proud to be a patriot, and proud to support and defend our constitution against
all enemies, foreign and domestic, as an officer in her military.
Posted by Steven Givler at 7:37 AM No comments: 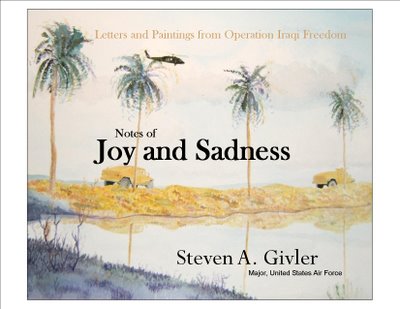 Here's the latest on my book, Notes of Joy and Sadness Letters and Paintings from Operation Iraqi Freedom. It looks as if my publisher was optimistic in their forecast of a release by late June - or mid July. The most recent word I have from them is that, based on the response they're getting at the book shows, they've had to revise (upward) the number of copies they're ordering in the initial printing, and that has changed where the book fits into the printer's schedule - or something like that.

So, although the book is delayed, it's apparently a good thing, because demand is greater than was anticipated. All I know is I'm anxious to see the finished product, and am looking forward to the day when this space will announce that it's been released. Keep watching.
Posted by Steven Givler at 11:30 PM No comments: