Here's the finished painting. I painted in some partial cloud cover and, as per my wife's suggestion ( I always try to do what she tells me.) I darkened existing shadows and added some that weren't already there. Shadows are like punctuation; they give shape and meaning to otherwise confusing information. Still, sometimes I find myself resisting adding them, or making them dark enough. I'm not sure why I'm so hesitant, but when I overcome the hesitation I'm usually pleased with the result.
Posted by Steven Givler at 12:09 AM No comments:

Waiting for a sky

Here's the result of my third night's work on this painting. All that remains, at least as far as I can tell right now, is to paint in the sky. Before I get around to that, I'm sure I'll notice some details that will need some attention, but I think most of the work is done. The hard part is restraining myself from going in and adding too much detail in areas that should be vague.
Posted by Steven Givler at 11:38 PM No comments:

Here's tonight's installment of my current project. I've added more of the vegetation and I took the masking off the dead trees in the foreground. I also started adding the shadow on the shaded side of the dead wood. I figure one or two more nights' work and it'll be done.
Posted by Steven Givler at 11:44 PM No comments:

Here's the first night's work on my painting of the photograph that appears below. It's not lighted evenly, but I think you get the idea. The trees in the foreground are masked with thin strips of masking tape.

By the way - I have some BOOK NEWS - I heard from my publisher this week, and learned that publication is behind schedule. I know Amazon.com is predicting delivery dates of mid-July, but I think it's going to be later than that. How much later? I don't know at the moment (That was my question to my publisher.) but as soon as I know I'll post it here. Keep watching this space.
Posted by Steven Givler at 10:53 PM No comments:

Not A Painting (Yet)

Here's a look at what will be my next project. It's such a wide panorama that I had to overlap 3 full-page photographs to get all of it. The very light-colored trees in the foreground will be a challenge, since watercolor paints are (mostly) transparent, and we don't use white. I'll have find a way to mask the intricate branches so they're unaffected when I'm painting all around them. Then I'll remove the masking and paint in the light purple-grey of the wood, and the darker places that are cast in shadow. I can't wait to start.
Posted by Steven Givler at 4:46 PM No comments: 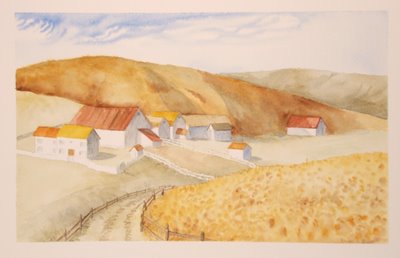 Here's the finished version of the painting I showed below. The inspiration for this came from a 1920 oil on canvas work by E.C. Fortune called Hatton Ranch, which is at the Monterey Museum of Art.
Posted by Steven Givler at 11:32 PM 2 comments: 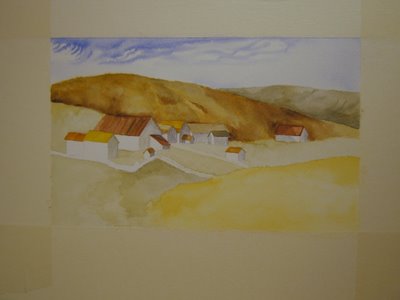 I'm half-way done with my last final for this quarter. It's a paper on US-Israel policy during 1973. I know it sounds like a real page-turner, but take it from me- Yawn

So nobody will blame me if I take a break and do some painting, right? Here's what I did tonight. Now, at least, nobody can say I got nothing done. I have to say that, even unfinished, it's looking better than my paper.

Time for true confessions: I have a recurring fantasy of being confronted by a beautiful woman who asks me to paint her in the nude.

What do I say?

At least let me wear a sock to hold my brushes.

I can't take credit for that. I want to say that Groucho Marx said it, but it seems kind of racy, even for him. Then again, he did say, "Women should be obscene, and not heard," so maybe that isn't too racy for him.
Posted by Steven Givler at 11:50 PM 2 comments: 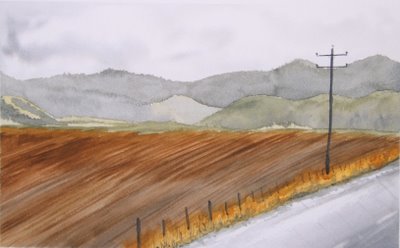 I'm still a finals-taking machine, but I took some time last night to do this painting.
Posted by Steven Givler at 9:14 AM No comments:

I'm in the middle of final exams now, and I have four papers to write by the end of next week. Every every once in a while I take a break and do some painting, though. I've been working on this one for about a week now. It's a view of the hills southeast of Gonzales, CA.
Posted by Steven Givler at 11:15 PM No comments:

This excerpt from my book, Notes of Joy and Sadness, says exactly how I feel about our boys' killing of Abu Musab al Zarqawi. The book is still slated for release at the end of this month.

We're at work. We're standing, eyes glued to one of the screens on the wall above us. Different images flicker elsewhere on the wall, but the one we're interested is grainy black and white video, transmitted live. We're watching because an indicator on the screen says the operator has designated a target. A moment later we get the word - a weapon has been released. Someone is about to die.

This scene has repeated itself many times over the last few days. It's one of few experiences that I've found is not diminished by repetition.

Am I remorseful? Do I feel for the men who, in a matter of seconds, will cease to exist? The place in my heart that would be occupied by remorse is scarred by images of a hostage slaughter house. The part of my mind that might harbor compassion is imagining a makeshift video studio, where Al Jazeera cameramen drank tea to the sounds of innocents' life blood gurgling in their windpipes.

The people we watch die are blissfully unaware. What are they discussing on that street corner? What is he thinking as he drives that car? Do they, for the split second before impact, wonder at the sound of wind, rushing over the stubby wings of the warhead? Even if they do - even if they hear the missile, homing inexorably from a vehicle so far away they never saw it, their brief shock is nothing to me. The searing flash, the concussion that separates their body from their soul bothers me not a bit. It is merciful.

It is not the weeks or months-long separation from friends and family, being held like livestock for a bargain that will never be struck. It is not the desperate sickness that invades the heart, knowing you will never see your family again. It is not the terror of knowing your captors consider you most valuable when your head is severed, dangling from their bloody fist in a television commercial for evil. It is not the grinding by of countless hours of loneliness and fear.

It is quick. It is better than they deserve. Far from regret, I am grimly satisfied at my role in this process.

Maybe it shocks you that I can appreciate beauty, love my family, and calmly contemplate killing men. It shouldn't. The understanding of good and evil and the willingness to act in the differentiation between them is fundamental to those more appealing characteristics.
I'm still me.

Steven
Posted by Steven Givler at 3:45 PM No comments: 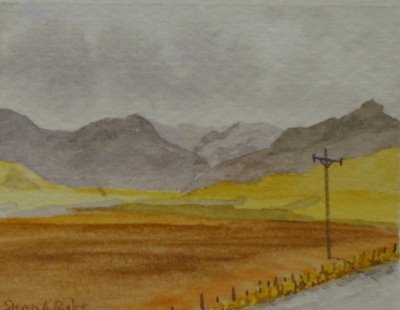 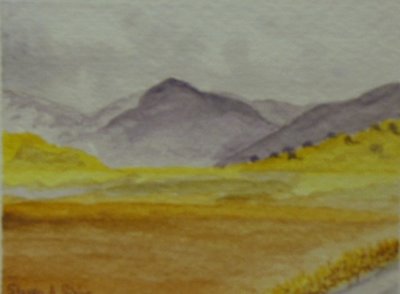 Last weekend I drove to Gonzales, CA and took some spectacular photos of the sun coming up over the eastern rim of the valley. These two small studies are preparation for a large painting I'll do based on one of those photos.
Posted by Steven Givler at 2:13 PM No comments: 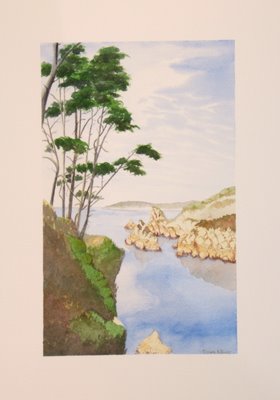 I finally got some painting done. Here's a view of Whaler's Cove, in Point Lobos State Park. The state park is known as the most dramatic meeting of earth and sea in the world. I'm inclined to agree.
Posted by Steven Givler at 12:11 AM No comments: