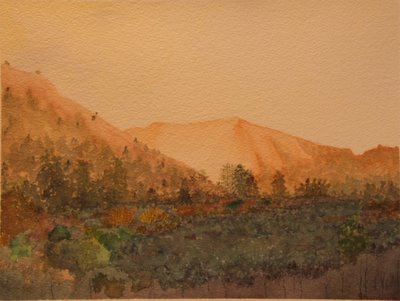 I finished this one last night. A late-afternoon rainstorm a week or so ago produced a spectacular double rainbow. I got home, grabbed my camera and my son and drove to a good spot to take some pictures. When we turned back west to head home, the lowering sun was bathing hilltops in orange light while the floor of the Carmel Valley was in shadow.

Funny how you go out intending to get a picture of a rainbow, and wind up with an image of something entirely different.

If you haven't already, please feel free to scroll down and view the cover art for my book, "Notes of Joy and Sadness" which will be out in May. The book is paintings and letters from my two deployments in support of the War on Terror. The bulk of the paintings from the book can be found in the archives.
Posted by Steven Givler at 11:08 PM No comments: 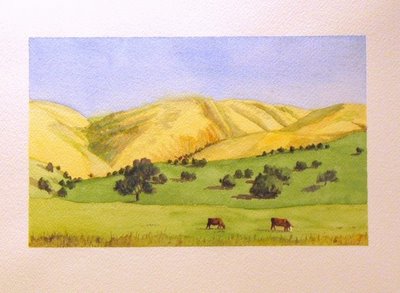 Here's the painting I began last night. My little heifer seemed lonely, so I gave her a companion. I also reworked some shadows on the hills and filled in the big oak tree some more. Good watercolor paper is worth what you pay for it; cheap stuff never would have stood up to the reworking this painting required. Of course, if you know what you're doing, maybe you don't have to rework things. Perhaps then you could get by with cheaper stuff.
Posted by Steven Givler at 12:40 AM No comments: 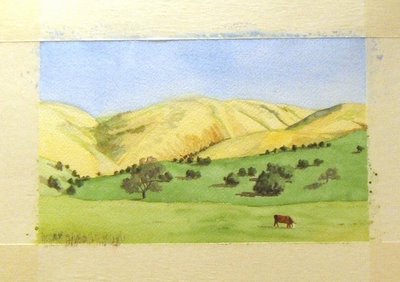 Here's a look at tonight's project. I was a hair's breadth from tossing it out a couple of times, but even when I don't like the direction a painting is taking I try to press on to the ending. Sometimes I end up working pretty hard to salvage it and wind up with something better than I expected. Other times I still want to throw it out when I'm done, but I learned a couple things in the process. Either way, it's still a lot of fun.

Please scroll down and have a look at the cover of my new book.
Posted by Steven Givler at 11:43 PM No comments:

The Cover of my Book 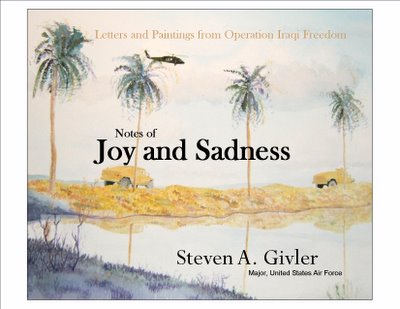 My publisher sent this proof of my book's front cover. I've asked for purple bands across the top and bottom - where the text appears - but other than that I'm pretty happy with it. The title of the painting is "Morning in Paradise I". It's part of a series of two paintings, the other of which continues the image to the right, with a Bradley fighting vehicle, a 5-ton truck, and a fuel truck all in convoy, mirrored by the calm surface of the water. At the lower right corner of Morning in Paradise II, a kingfisher hovers over the surface of the water.
Posted by Steven Givler at 7:50 AM No comments: 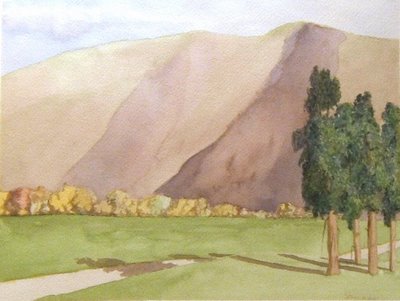 Here's a painting I just finished with the new brushes I bought in Chinatown. Eucalyptus trees are a novelty for me. The first time I paid any attention to them was when I saw them around the Baghdad International Airport. They were the dustiest, most forlorn-looking trees since Charlie Brown's Christmas Special. I thought their droopy, bark-shedding slovenliness was due to some condition in Iraq, but when I moved here I observed that they look the same. There are groves of them in Pacific Grove, where migrating monarch butterflies hang in big clusters. The trees in this painting are in the Carmel Valley.
Posted by Steven Givler at 12:48 AM No comments: 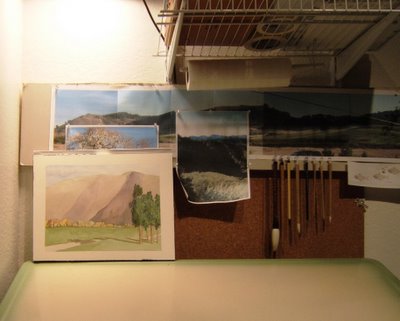 While I wait for proofs from my publisher, I'll tell you about our trip last weekend to San Francisco. We stayed at the S.W. Hotel in Chinatown, and watched the big parade that marked the end of the Chinese New Year celebration. The parade was about 2 and a half hours long, and we made the tactical error of being near the end of the route. By the time the dragons (one was 210 feet long) and the lion dancers reached us, they were exhausted. Next time we'll get a spot closer to the front.

There was plenty to see, but the parade was poorly organized, so there were gaps of nearly half an hour during which nothing happened, except that hoodlums uphill from us rolled smoke bombs down into the crowd. One strange aspect of the parade was my reaction to fire crackers; I would not have expected it, but every time someone set off a string of them, I had to supress the urge to grab my family and shove them under cover. We didn't come under fire that often when I was in Iraq, but it seems that when we did, it made a bigger impression on me than I'd realized. I don't know to what else I can attribute that response.

The next day we drove around and saw some sights. We took a boat trip under the Golden Gate Bridge and around Alcatraz and we had a great time. I had mid-term exams this week, but for those two days I didn't think about them at all, and it was great.

Aside from just spending time with Susan and the kids, the best part of the trip for me was buying paintbrushes in Chinatown. I bought eight of them, all various sizes, and all of which taper to the finest points you've ever seen. I couldn't wait to get home and try them out.

You can see them hanging in this picture of my studio.
Posted by Steven Givler at 12:27 AM No comments:

A dirt road winds through the valley just below our house. It's a great place to walk the dogs. Some mornings we're there in time to see the last bits of fog clinging to the low spots.
Posted by Steven Givler at 6:27 AM No comments: 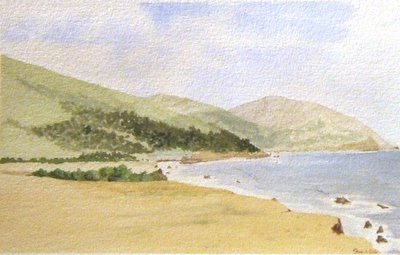 While I'm awaiting updates on my book, here's a view of the coast just south of our home. This is north of Big Sur, looking toward Bixby Bridge.

If you haven't already, please visit the archives below to see excerpts, reviews, and paintings from my soon-to-be-released book about Iraq, Notes of Joy and Sadness.
Posted by Steven Givler at 11:18 PM No comments:

Some Local Landscapes, For A Change

I've done everything that can be done to complete my book. Last week I shipped my publisher 34 of the 40-some paintings that will appear on its pages. Ocmulgee Arts, the gallery that shows my work in Macon, GA, has shipped a couple, as has Parchman Stremmel Galleries, of San Antonio, TX. Now it's up to the publisher to digitize the paintings and arrange the text. I expect to see a proof by the end of this month.

Now that the book is all but put to bed, I'm free to start painting local landscapes, and posting them here for you to see. I hope you like them.
Posted by Steven Givler at 10:51 PM No comments:

This line of hills forms the south ridge at the mouth of the Carmel Valley. It's one of the first sights I see every morning on my way to work, and one of the last I see when I return home. Sometimes it's shrouded in the fog that blows in from the ocean; Sometimes it's bathed in golden light, relieved by purple shadows. Every time I see it I'm tempted to cancel my plans and grab my brushes.
Posted by Steven Givler at 10:43 PM No comments:

The rolling hills and deep canyons along Carmel Valley provide perfect opportunities to study light and shadow.
Posted by Steven Givler at 10:40 PM No comments:

Steinbeck wrote about the dry summers here. They turn the fields the color of moutain lions.
Posted by Steven Givler at 10:35 PM No comments:

Our home in West Texas was surrounded by cotton, soy, and millet fields. They stretched from one horizon to the other. This painting can be seen at Parchman Stremmel Galleries, in San Antonio.
Posted by Steven Givler at 10:31 PM No comments:

This is Big Bend National Park, in Southwest Texas. Susan and I loved camping there before the kids were born. Someday we'll go back, and introduce them to this vast, enchanting land. This painting is showing at Parchman Stremmel Galleries, in San Antonio.
Posted by Steven Givler at 10:26 PM No comments:

Random House will publish some of my letters1

In September, Random House will publish the book, Above and Beyond, a compilation of letters written home by American military personnel during the war on terror. The effort is being funded by the National Endowment for the Arts.

I'm very excited to tell you that two of my letters will appear in the book. I just finished reviewing the editor's first draft.

I'm not sure which I like more - the thought of being published again, or the irony of being funded by the NEA.
Posted by Steven Givler at 7:43 PM No comments: